The Assembly Judiciary Committee says an impeachment inquiry into Gov. Cuomo will conclude "within several weeks."

The committee has been hearing from the lawyers appointed to the investigation. The committee’s chairperson, Charles Lavine, says they are keeping this confidential to protect witnesses and the alleged victims from any form of retaliation.

Davis Polk, the law firm hired to head up the investigation, will update members of the committee on Aug. 16 and Aug. 23, then make recommendations to the full Assembly on whether to proceed with impeachment. 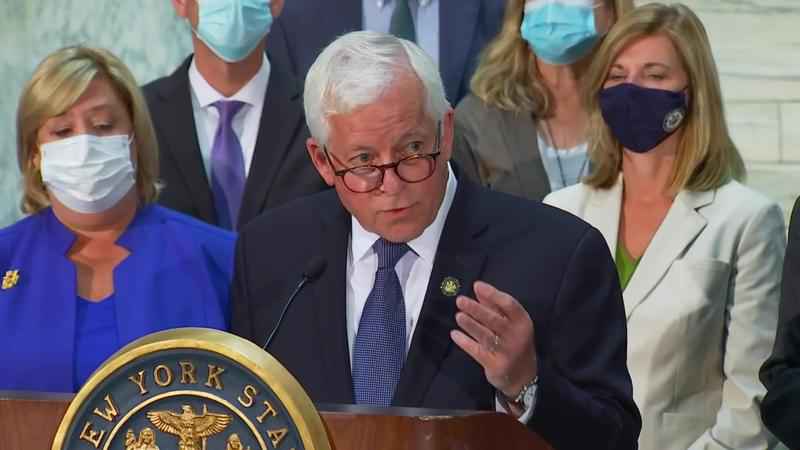 There is no date yet on when the impeachment articles could be introduced or voted on.

Cuomo has a deadline of this Friday to submit evidence to support his case.

Assembly Speaker Carl Heastie appeared at the Judiciary Committee news conference. He says he hasn’t spoken with the governor.

Heastie stated that we all understand the gravity of the situation we find ourselves in.

The speaker when on to say he expects the Assembly probe of Gov. Cuomo to be over in a matter of weeks, not months.

It has been just six days since Attorney General Letitia James released a scathing report of the governor, concluding that Mr. Cuomo sexually harassed 11-women, including a state trooper who was a member of his private security detail.

Lavine, who is chairman of the Judiciary Committee, says he will use the AG’s report to help determine if the Assembly will draw up articles of impeachment against the governor, but the committee will also consider evidence and testimony gathered by their own investigators.

In case you’re wondering, Lavine says there doesn’t necessarily have to be evidence of a felony or a misdemeanor to impeach the governor, suggesting that being guilty of sexual harassment could lead to impeachment based on "corruption of office" charges.

"I understand there are some people who want impeachment voted on now to remove him from office, and I understand that. However, if we are not in a position to present our best case, he could very well win in the court of impeachment," said Lavine. "For everyone who is concerned about him being in office now, if he wins, and he returns to office unfettered, that is another danger. So it’s a matter of balance."