NewsChannel 13 reporter Jacquie Slater rode along with Officer Jahmale Dickson to get a front seat view of what it’s like to be a black officer in the Capital City as gun violence spikes, the Black Lives Matter movement gains strength, and there are calls to defund police.

Dickson was featured as a NewsChannel 13 Kid Who Cares back in 2017. He graduated the Albany Police Academy on Jan. 10. 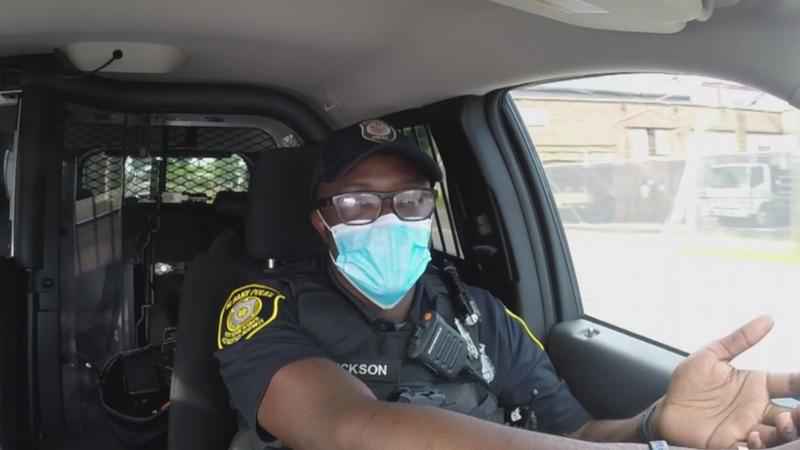 Right around the same time, a 44-year-old man arrives at Albany Medical Center, also shot in the torso. Officers find evidence of a shooting near Sherman and Robin Streets.

Less than an hour later, there’s another call for shots fired in the same area. Officers find two bullet casings but no victim.

On the scene for all three of these calls is 21-year-old Dickson. An Albany native, he grew up on the very streets he now patrols.

"It’s tough to see your city like that, you know, with the amount of gun violence. People just they just do crazy things," said Dickson.

Just as things are wrapping up at the third call, a fourth call for shots fired comes in. Lights and sirens on, Dickson is heading to Lexington Avenue and First Street. A crowd of onlookers there taunts the officers charged with securing the scene. Dickson keeps his cool and tries to deescalate the situation.

"Have you had people shout things at you or say things to you when you’re working about being a black officer right now?" asked NewsChannel 13 reporter Jacquie Slater.

"You get the names, you get the traitor, you get all of that. But little do they know that most of these black officers that are here were from here. So you know, we’re just doing a job," said Dickson.

In all, four people were shot on this one night in Albany, one of the most violent nights in his short career.

Dickson wanted to be a cop since he was just 12 years old. Keeping his eye on the prize, he kept busy and out of trouble.

"My group of friends, we chose to go to the Y every day. Every day we would hook up, and we would go swimming, we’d play basketball," said Dickson.

Sadly, that Y closed last year and the Albany that Dickson loves has been thrust into one of the most violent times in recent history. In the first six months since graduating the Albany Police Academy, he’s seen the Black Lives Matter movement kick into high gear following the death of George Floyd. There’s been rioting and protests and calls to defund police.

"What’s it like to be a black cop right now?" asked Slater.

"You see what’s going on and you’re literally, you’re caught in the middle of it because on the one hand I am law enforcement and at the other end when I go home I’m a black man," said Dickson.

"You lost friends. What was the reason?" asked Slater

"Because I became a cop. You know and I’m talking friends that I’ve grown up with. You know from little, I mean running around the neighborhood, really close friends. Moment I became a cop it was like, nah," said Dickson.

Amid the unrest and the coronavirus pandemic, gun violence has spiked all across the country. The number of shooting victims in Albany is up more than 250% over last year with many of the victims Dickson’s age or even younger.

"Do you think we can get past what we’ve seen in the past two months now?" asked Slater.

"I think so. We just we have to have stuff available for everyone to do," said Dickson.

When asked where he sees himself 20 years from now, Dickson says he’ll still be in uniform — hopefully in a community-based position.

Even with all that’s been going on, he has no regrets in following his dream.

"I think this job is amazing. You know, I think that anyone, if you have a problem with law enforcement, take the test. Be that change," said Dickson.