SARATOGA SPRINGS – Black Lives Matter activists were on the steps of City Hall in Saratoga Springs Tuesday, demanding an apology from city officials for what they’re calling race-baiting comments.

The activists were also accusing city officials of fearmongering and defamation.

The activists who gathered on the steps of City Hall all live in Saratoga Springs, and claim they’ve all experienced racist encounters with police during their lifetime.

Their latest grievance comes after Assistant Police Chief John Catone and Public Safety Commissioner Robin Dalton blamed a recent uptick in violence on gang members coming from Albany to sell drugs, a statement they believe is a dog whistle with racial overtones.

"To blame uptick on violence when brawls have been going on on Caroline Street for years just like my people have been saying. To have the nerve to blame gangs in Albany that are coming to sell drugs for twice the price with no proof," said Samira Sangare, with Black Lives Matter. 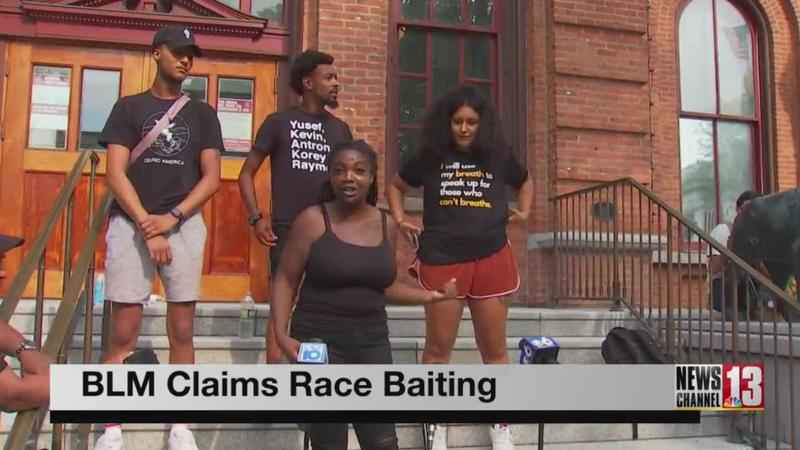 "You’re taking whatever you can, reaching for whatever narrative you can to dispel from whatever makes you look bad," said Chandler Hickenbottom with Black Lives Matter.

Especially upsetting to the activists, after Catone insisted his police department was not racist, he added anyone pushes that narrative, he’d pull out every single connection his family has made over the last 130 years to stop that narrative.

"When Catone puts out a thing saying that he’s going to change the narrative, it really sounds like you’re meaning you want to shut people up. They want to quiet people up," said Lexis Figuereo with Black Lives Matter.

"When you have the assistant chief saying that he will use his power to stop our freedom of speech, to stop us fighting for our injustices, to stop us from using our own voices is literally fascism," said Sangare.

Learn about what other accusations protesters are angry about, and say are false by watching the video of Dan Levy’s story.