Saratoga police have arrested two more people from the July 14 Black Lives Matter protest. They’ve already been released, but their fellow activists are not happy and held a press conference Thursday outside of City Hall.

A couple of the activists who were arrested spoke to reporters on Thursday. Many say they were upset with how police handled the situation Tuesday.

On Tuesday night, a couple of activists came to Saratoga police when they found out Lexis Figuereo had been arrested. Some of the activists learned that they were going to be arrested as well. They were arrested for their actions on July 14 when police say they blocked traffic.

Black Lives Matter Activists are gathering outside the Saratoga Springs Police Department. They are planning on having a press conference. pic.twitter.com/HiWKnKeFOM

Some of the BLM leaders say police didn’t communicate with them why they were being detained. Many say they didn’t have access to water at first, or were not allowed to wear masks. 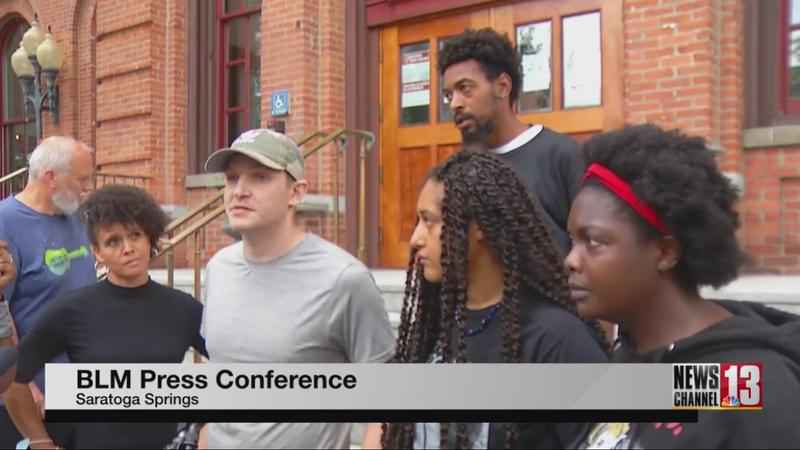 Lt. Bob Jillson from Saratoga Police says he isn’t sure why they weren’t allowed to wear masks, but is looking into the situation. He also says police want to reach a compromise with the protesters.

"I’m ready to be arrested, but you need to tell me what I’m being arrested for. That is my right. I need to know if you’re going to arrest me, you’re saying, ‘you’re under arrest,’ you need to tell me," said Chandler Hickenbottom, with Saratoga BLM.

"We survive and we excel together. Not being driven apart by for whatever reasons, and I respect their positions and their concerns," said Lt. Bob Jillson with Saratoga Springs Police.

Here is part of the press conference. pic.twitter.com/ylRD508rQV

Jamaica Miles and Alexander Patterson were the latest people to be arrested. Miles is a well-known activist and Schenectady School Board member, while Patterson is a candidate for Clifton Park Town Board.