Boy, 8, among two killed by out-of-control motorcycle in Lake George

LAKE GEORGE – People from multiple communities in the North Country are trying to wrap their arms around a Sunday afternoon tragedy and the families most affected.

The tragedy unfolded in broad daylight when an out-of-control motorcyclist crashed into a group of pedestrians, killing two of them, including an 8-year-old boy. Two other people were hurt.

Sources tell NewsChannel 13 the man was riding the motorcycle without a license.

It happened at the Lake George Expedition Park — formerly Magic Forest — on the east side of Route 9, just south of Lake George Village. 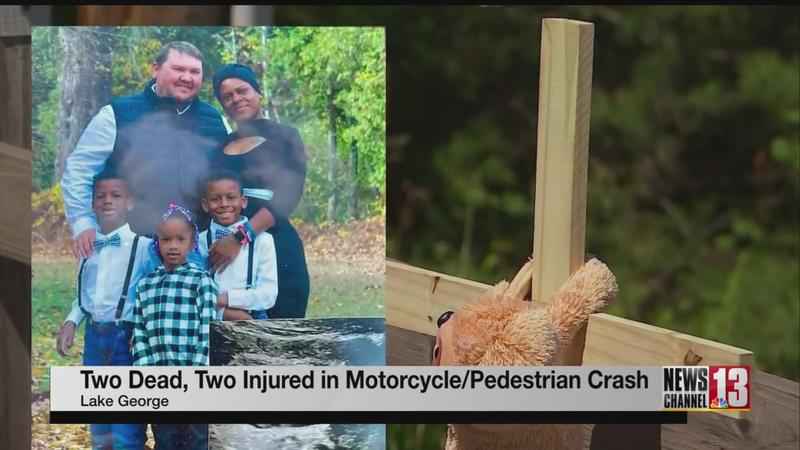 A roadside memorial that popped up Monday marks the spot.

State police tell NewsChannel 13 a man on a motorcycle was northbound on Route 9 around 3:40 Sunday afternoon, speeding recklessly on the road when he lost control and slammed into a group of six pedestrians, including a woman wheeling a baby stroller.

The motorcycle crashed into a stone wall at the access point of a hiking trail. Boulders and cement from that wall were sent flying in all directions.

The group of pedestrians struck was a family unit from Lake George: 38-year-old Jamie Persons died at the scene, along with 8-year-old Quinton Delga-Dillo, a 3rd grader in town. His mother Jasmine Luellen, who turns 31 June 14, was injured, and rushed to Albany Medical Center, listed in stable condition.

The person state police say is responsible is 33-year-old Anthony Futia of Albany, a man with a criminal record. He is currently in critical condition at Albany Med.