ALBANY – Candidates running for Albany Mayor faced off in a forum hosted by the Albany Branch of the NAACP and the League of Women Voters of Albany County Tuesday night.

They were asked about the recent uptick in gun violence in the city, improving community-police relations, police reform, addressing blight in the city, sustainability and community investment.

At the end of the forum, each candidate summarized why they feel they should be elected.

"My purpose for running is to bring about change,” Rev. Faust said. “I believe that the city needs to change and I believe that it needs to go forward. I believe that with all that we’ve been through that we need someone to restore the vitality, the morality." 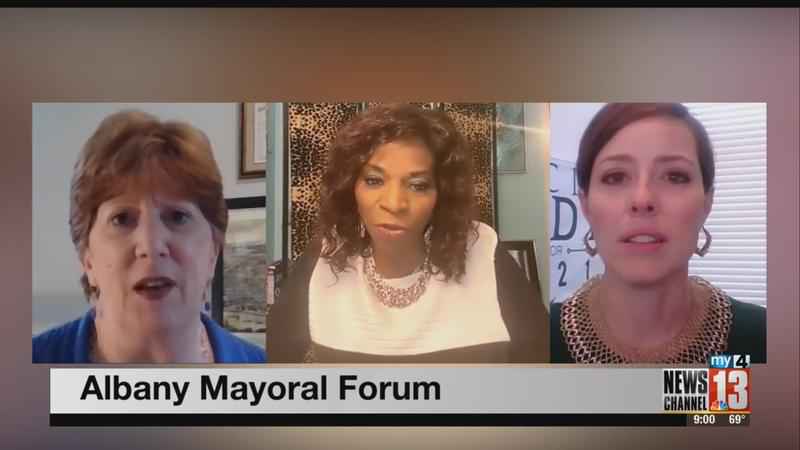 Sheehan chose to use her one-minute recognizing city staff who have worked hard over the past year.

"When we were faced with financial challenges unlike anything we’ve ever seen before you know we fought through it,” Sheehan said. “We had a summer youth employment program, when most other cities across the country did not. We opened our pools, we opened our parks, we had programs and that happened because of the dedicated workers here in the city of Albany."

Purdy explained why she refers to herself as “The People’s Mayor.”

“We definitely had an unprecedented year, but it was just one year,” Purdy said. “We’ve had lots of other years that weren’t unprecedented that we’ve struggled. So what I think the City of Albany absolutely needs is a gritty leader who’s unafraid, who is experienced and knows what they’re doing, who knows what they’re talking about, who has a genuine concern about people and knows how to manage a city of people not a city filled with policies."

You can watch the full forum on the Albany NAACP’s Facebook page.

The primary election between Sheehan and Faust is June 22. Early voting runs June 12 to June 20. Absentee ballots are available, but you’ll need to apply for one.

The general election is November 2.