Capital Region native to appear on ‘America’s Got Talent’

A Capital Region native is set to appear on "America’s Got Talent" on Tuesday night at 8 p.m.

Kieran Rhodes is a singer and songwriter from Burnt Hills. After graduating from Burnt Hills-Ballston Lake High School, he moved to Boston. He is currently in his sophomore year at Berklee College of Music.

Rhodes says he didn’t apply to be on the show, one of the "America’s Got Talent" producers heard him play in Boston.

"She reached out a couple weeks later and said she needed to have me on the show," Rhodes said. "She pitched me to the executives, and they pulled me right on."

His audition will air for the first time on Tuesday night’s show. He is urging everyone to tune in. 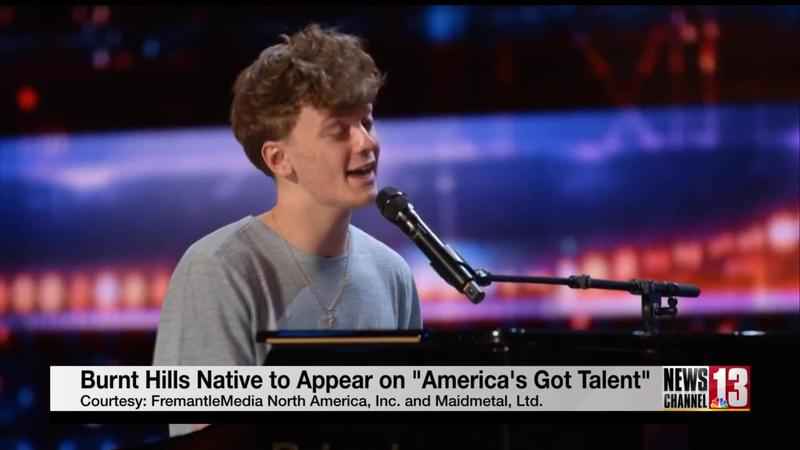 "This isn’t the way an audition usually goes. I’m not going to say anything else, but it’s not your typical audition, that is for sure," Rhodes said.

He said he was a little nervous about his audition, but not because of the 3,000 people that packed the Pasadena Convention Center.

"It’s just the fact that there are four celebrities that might tell you they don’t like you," Rhodes said. "It doesn’t sit well."

Rhodes says his passion developed for music when he started listening to Billy Joel.

"Billy Joel is kind of a big influence for me, and then I started getting into James Taylor and Randy Newman and all of those guys," Rhodes said. "They just inspired me a great deal, and that is kind of when I started writing my own stuff."

He was also inspired to start playing piano. He taught himself how to play, and writes his own songs, telling stories through his lyrics.

"Everything that I have lived for and done, all of that kind of comes together into one piece of music and I just want to share that with people and help people out," Rhodes said.