Cemetery maintenance at issue in Albany

ALBANY – The Evangelical Protestant Church Cemetery on Krumkill Road in Albany, which first opened in 1867, was under new ownership in the summer of 2019. However, the property was abandoned.

After NewsChannel 13’s Dan Levy reported about the high grass, out-of-control weeds, and overgrown brush that concealed headstones, Travis Winkleman drove down the Northway from his home in Saratoga County the next day and began, in the pouring rain, tackling the high weeds with a tiny push lawnmower.

In the ensuing days others joined in, but the interest, motivation, and energy of many other good Samaritans eventually faded.

However, Winkleman and a handful of others, over the past two years have continued to maintain the four-acre property.

"It has got to be done," Winkleman said. "I’m hoping that maybe someone will step in and start doing it. It’s just beating me. It really is." 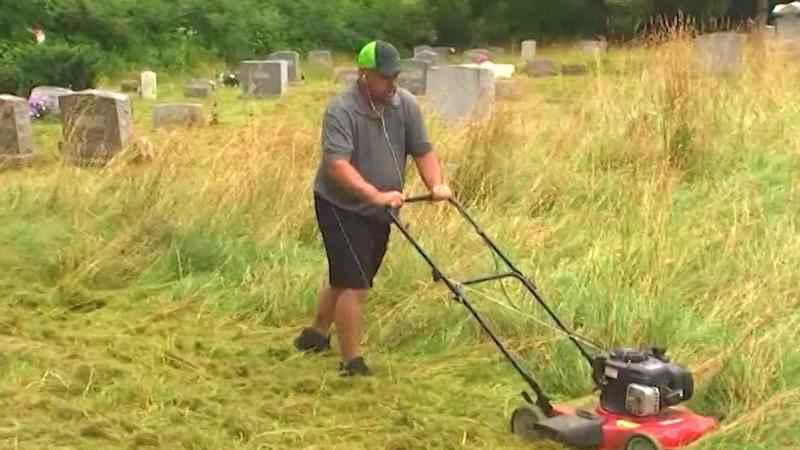 Walking the grounds on Wednesday afternoon, Winkleman remains enamored by the history that’s all around him, mesmerized by the stories the world will never know, and grateful to the American war heroes buried in the cemetery.

He also takes great pride to know that he and a few others have been maintaining the cemetery for two straight summers.

"It’s got to be done," Winkleman reiterated. "They need respect. They deserve respect. They fought for our country, and if we can’t mow the lawn for them, what kind of a country are we living in?"

Winkleman purchased a new riding lawnmower and trailer specifically for the thankless job, but now that has taken a toll.

When the ordeal began, Mayor Kathy Sheehan visited the cemetery to thank the volunteers. She also assured them if the property wasn’t maintained, the city would see to it that it was. Winkleman now wants that to happen sooner rather than later.

"Even if it breaks me, I’m going to be here, and I’m going to make sure that it’s done," Winkleman said. "I’m just hoping that the city of Albany will see this, and they’ll step in because they’re a lot closer than I am."

However, it’s kind of like a Catch-22 situation. As long as the cemetery is maintained, there’s no reason for the city to think the job isn’t getting done. Winkleman says he can’t stop mowing because he believes he owes it to the veterans to continue doing what he’s been doing.