ALBANY – According to city officials, nuisance complaints have been piling up against the Cafe Hollywood on Lark Street for more than a year and a half, and on Wednesday night city officials officially asked the Zoning Board of Appeals to urgently shut it down, essentially calling for a permanent Hollywood ending.

"I just want to stress that I’m filing this application and I would appreciate the Board treating it with a sense of urgency," Brad Glass, Albany’s Director of Planning, expressed to the ZBA.

Glass filed preliminary paperwork with the ZBA that characterizes activity around 275 Lark Street as "a continuous and unbroken pattern of incidents" that have "escalated in seriousness and have negatively impacted the safety and livability of (several neighborhoods) in the city."

Anderson is a resident of the Center Square Neighborhood who says he is well aware of the nightclub notoriety that has spawned at the Cafe Hollywood. 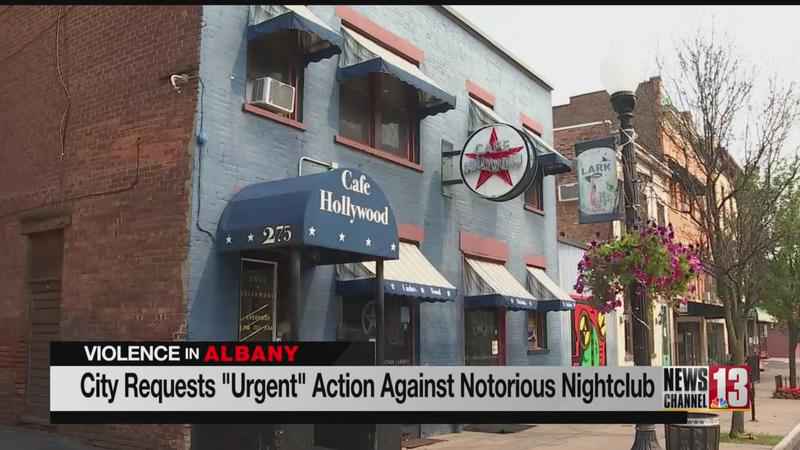 "We have an overall issue of violence that’s a problem and you shouldn’t be scapegoating this place for that," he stresses, "But they should be held accountable for what has been done and what has been going on there."

According to dispatch records, Albany Police have made 120 service calls to the Cafe since 2019. Last Friday night, the city says an altercation that began inside the cafe resulted in the shooting death of a 34-year old victim on nearby Willett Street.

Authorities say "troubling incidents have continued to crystallize around Cafe Hollywood" and it has become a "hub of intractable violence."

"This city is apparently choosing to look for remedies that it believes are important in a state of emergency," Richard Berkley, Chair of the Zoning Board of Appeals, points out. "They called it a state of emergency and they have a rationale for that. In an emergency, if you’re in a sinking lifeboat, you take all the things that you can to try and keep it from sinking."

Berkley says the Board has the authority to put the Cafe Hollywood out of business for up to two years. He informed the city he’d like to see police records, along with State Liquor Authority complaints, and he’d like to hear specific remedies to gun violence before any decisions are made.

The ZBA has scheduled a public hearing for August 11th.

News Channel 13 reached out to Cafe Hollywood’s owner Collin Rost seeking comment. By air time Wednesday night we hadn’t heard back from him.