Cloud in a Bottle

Clouds form when warm air rises and pressure decreases. The air then expands and cools, once the temperature drops below the dew point a cloud forms. Invisible particles in the air in the form of pollution, smoke, dust, or even tiny particles of dirt, become a nucleus on which the water molecules can attach themselves and go from invisible to visible as a cloud.

Pumping air into the bottle forces water vapor to squeeze together or to compress. Releasing the pressure quickly allows the air in the bottle to expand quickly. In doing so, the temperature of the air in the bottle becomes slightly cooler. This cooling allows the water vapor to stick together (or condense) and form tiny droplets. For this experiment instead of water, we will use rubbing alcohol because it forms a more visible cloud since alcohol evaporates faster than water. Alcohol molecules have weaker bonds between them than water molecules, so they let go of each other easily.

Step 1: Put on safety glasses and pour a little alcohol into the bottle so it puddles on the bottom. 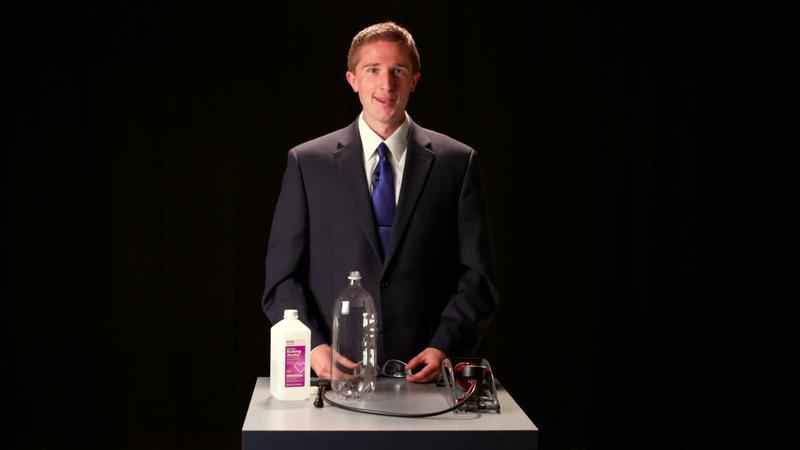 Step 2: Swirl the alcohol around inside the bottle. Make sure it coats the lower sides of the bottle.

Step 3: Attach the stopper to the air pump.

Step 4: Insert the stopper into the bottle and pump eight to ten times. As you start to pump, you’ll notice that the stopper wants to pop out. Hold it tightly in the bottle opening so it doesn’t do that.

Step 5: Quickly remove the stopper and you’ll see the cloud form almost instantly in the bottle. If the cloud is faint or just a small puff of one, you’ll need to add more pressure in the bottle before you pop the stopper.

Step 6 (Optional): Put the stopper back on the bottle and start pumping air in it again. The cloud will disappear. Quickly remove the stopper and you’ll see the cloud form almost instantly in the bottle once again.