A Confederate flag outside Albany High School has parents talking. It was displayed earlier this week on a car belonging a sub-contractor at the school, as the district renovates and expands the building.

Wednesday, the City School District of Albany said that person is no longer working at the school. The district is taking a strong stance on the flag and condemning hate symbols.

Monday, a student posted a picture of the construction worker’s car parked on school property.

The district says that worker was asked to move the car off school property. 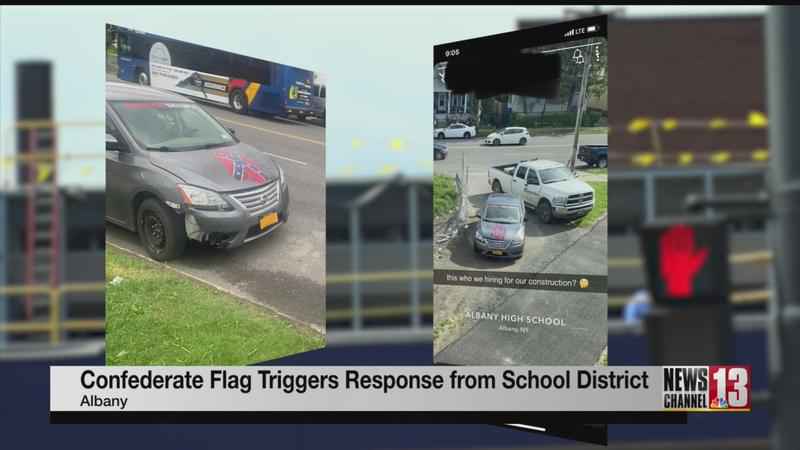 "And then on Tuesday, the vehicle came, it appeared again, in the vicinity of the school, so we had to address the situation again," explained Superintendent Kaweeda G. Adams.

NewsChannel 13 spoke to several concerned parents who did not want to share their identities. One posted a message shared hundreds of times on Facebook.

The parent said they "do not feel safe and or comfortable knowing this person is working inside my children’s school," saying, "it’s not sitting right with me," since construction workers are able to bypass security.

"It absolutely contributes to the social and emotional wellbeing of our students and our families. We don’t tolerate hate symbols or things like that in our district," Adams said.

Adams is taking a strong stance against the flag, and she says the district’s general contractor, Turner Construction, also identified displaying the flag as a "bias-motivated event" with a "symbol depicting hate". The person is no longer working at the school.

"They support that stance according to their own belief statements, and we have partnered with regard to ensuring that our work spaces are safe and free from this type of material," she said.

Adams says the school also partnered with law enforcement, including the District Attorney’s office. The district is looking at how they can properly screen construction workers, who enter through an alternate entrance.

Adams also called on the school community to continue to speak up and report disturbing behavior to administrators and authorities.