Gov. Cuomo put out what appeared to be a pre-taped statement on Tuesday.

There was no sign of him at the Governor’s Mansion.

Starting with his response to the most serious allegation so far against him that he groped a woman while in his personal home office, the governor in his statement flat out denied ever doing that. However, he did say that woman, who still has not been identified, plans to file a lawsuit against him.

He also talked quite a bit about his open behavior of hugging and kissing people throughout the years. 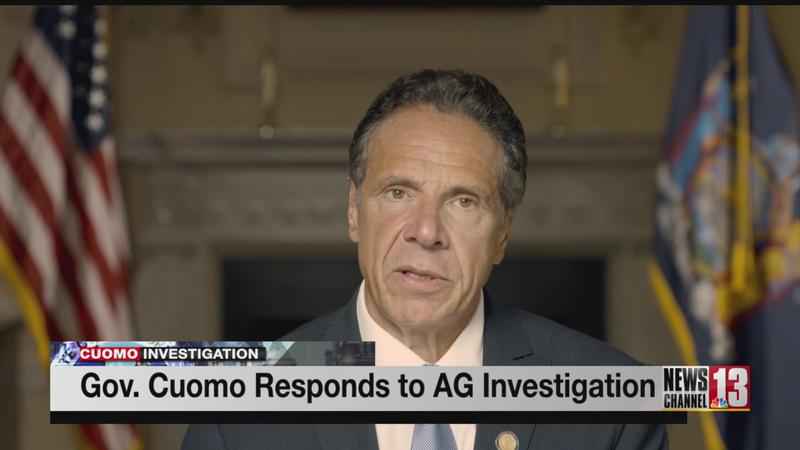 Many of the women who filed formal complaints said that made them feel uncomfortable, including Anna Ruch. She’s the one in the picture on the front page of the New York Times with the governor’s hands on her cheeks at a wedding.

In the governor’s response to Attorney General Letitia James’ investigation on Tuesday, he showed a series of pictures, a slideshow, of all the times he has done that in the past.

It was a presentation of pictures of the governor hugging and kissing people. He says he’s done this his whole life.

"Indeed, there are hundreds if not thousands of photos of me using the exact same gesture. I do it with everyone, black and white, young and old. Straight and LGBTQ, powerful people, friends, strangers." said Cuomo. "I now understand that there are generational or cultural perspectives that, frankly, I hadn’t fully appreciated."

The governor spent a few minutes of this response talking about one of the women who accused him, Charlotte Bennett. She’s been one of the most outspoken.

Hear what he had to say, and why he’s apologizing directly to her by watching the video of Subrina Dhammi’s story.

You can also click here to read the position statement from Gov. Cuomo, sent by his lawyer.