This is a follow-up story to Asa Stackel’s series "High Use in the High Peaks". Click here to see Part I.

NORTH ELBA – The DEC is giving NewsChannel 13 a look at the progress to its new trail to Cascade Mountain from the Mount Van Hoevenberg Sports Complex outside of Lake Placid.

The new trail is known as a Class V Trunk Trail. That means it is built to shed water and hardened to be sustainable. It will be 18 to 26 inches wide. Here’s what DEC’s press office says about the trail:

"Once completely built, hikers taking the new trail up Cascade Mountain will start at the Mt. Van Hoevenberg Sports Complex. There are two new trails being built that start here. First the new MVHE Trail up Mt. Van Hoevenberg (originally named Mt. Van Hoevenberg East Trail), which will take hikers approximately two miles to the amazing view of the High Peaks from the ledges at the top of Mt. Van Hoevenberg. The new Cascade Mountain Trail will depart from the MVHE Trail about one mile from the trailhead, they both share the same trailhead and first section. Once on the Cascade Mountain Trail, it will go another ˜4.5 miles to the summit of Cascade Mountain, with an overall trail grade of less than 10 percent. Both of these trails are being built to Class V Trunk Trail standards (see chart of trail classifications below), which will allow them to handle high use. DEC is following the most current trails industry standards for sustainable trail building. The target tread width on these two trails is 18"-26" with some sections wider than 26" to allow for passage of multiple hikers…The MVHE trail will be open this fall for winter recreation with hiking continuing while finishing touches are completed in 2021."

Compare the new trail to parts of the current trail from Route 73 that are 25 feet wide in some sections.

The DEC has been talking about the issue of these heavily eroded trails for decades.

"The old way of making a trail was signing straight up a mountain. That would, when it rained, help erode the trail itself. The modern trail is switchbacks, and different materials, like stone and wood, so it can last for 100 years," said Basil Seggos, DEC Commissioner. 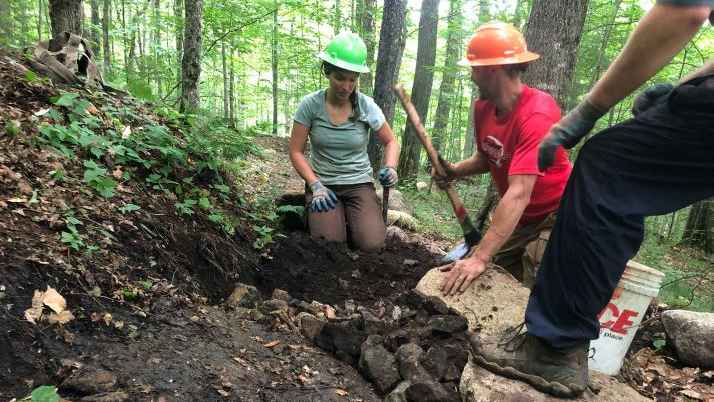 The current trailhead along Route 73 also presents parking issues, with hikers often parking their cars on both sides of the roadway after the trailhead parking lots fill up. The Mount Van Hoevenberg complex has five parking lots. The DEC says ORDA will have the final post-construction parking space count.

This is a follow-up story to Asa Stackel’s series "High Use in the High Peaks". Click here to see Part I.