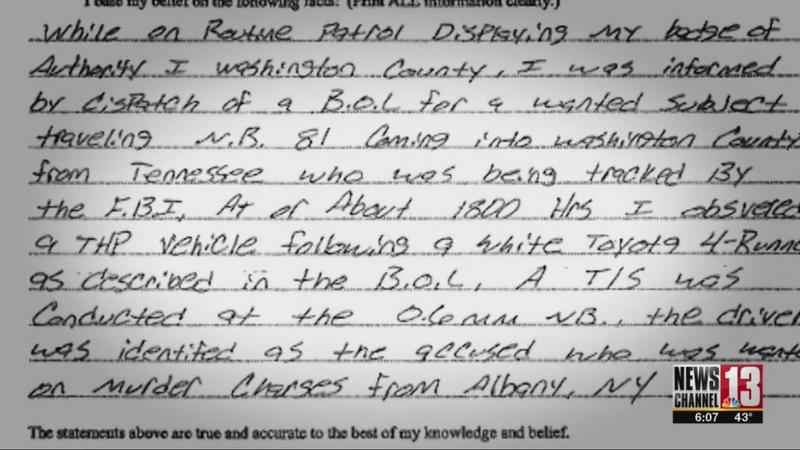 The suspect in a homicide in New Scotland has waived his right to object to extradition and will avoid a lengthy legal process to return to New York to face a murder charge, a clerk in Washington General District Court tells NewsChannel 13.

The court says he appeared before a judge Tuesday by video from the Abingdon, Virginia jail where he is being held.

Jacob L. Klein, 40, was arrested on a fugitive warrant near the Virginia-Tennessee border last Friday.

NewsChannel 13 obtained documents showing how Tennessee Highway Patrol identified and pulled over Klein in a white Toyota 4-Runner. The document says he was being tracked by the FBI.

Officials at the highway patrol say Klein was cooperative as he "was identified as the accused wanted on murder charges from Albany, NY" and arrested, as described in a written statement by a patrolman.

Another document from the Virginia district court shows law enforcement believed they had probable cause to believe that Klein was a fugitive from justice when they took him into custody.

UPDATE: I just got the statement from the patrolman who pulled over and arrested the New Scotland homicide suspect, Jacob L. Klein, last Friday in Virginia. Team coverage with @TessaBentulan beginning live at 4. @WNYT pic.twitter.com/5DjtCxr6Qv

The Albany County Sheriff’s Office tells NewsChannel 13 Klein will be charged with second-degree murder. He’s accused of murdering Philip Rabadi in his home.

NewsChannel 13 is learning that Klein and Rabadi’s wife were in a relationship years prior.

The sheriff’s office says Klein drove from Virginia and stalked the victim for three days before the murder happened.

Law enforcement arrested Klein as he was heading back to Virginia, where he lives. He was arrested near the Virginia-Tennessee border Friday, about two hours from his home in Wirtz, Virginia.

Klein is licensed as a physician assistant in Virginia, and online records show the license was issued in February 2022. Records in New York show he was last registered as a PA in 2018. It’s unclear how long Klein was living in Virginia prior to getting a PA license there.

Klein has ties to the Capital Region, though. Apple tells NewsChannel 13 he went to Albany Academy and graduated in 1997, and that he also served in the Marines as a combat medic.

The sheriff says police have a "decent motive developed" but he could not comment on it.

He’s expected to return to New York in custody later in the week or early next week, at which point Apple says he will be charged with Rabadi’s murder.