WHITEHALL – After a man stole money from one Whitehall business, police say he spent the money at another business down the street, owed by the original business owner’s brother. But it was no ordinary $20 bill, and a series of bizarre coincidences allowed police to capture the suspect.

It was approximately 10:30 p.m. on Tuesday night when a man, under the cover of darkness, with crow bar in hand, jimmied the front door at the Railyard Restaurant on Broadway in the village of Whitehall.

Surveillance video inside the popular taproom captures the man’s every movement, including emptying out the change drawer of the cash register, lifting a 50-pound safe and carrying it out with him, and also stealing a $20 bill that had been taped to the wall behind the bar.

"We didn’t know it was missing until we watched the cameras and saw him take it off the wall," said Mike Putorti, co-owner of the Railyard. "That’s how we knew the twenty dollar bill was gone because we watched him do it."

But it was no ordinary $20 bill. It was one of those bills an owner typically sets aside, holds onto, and displays publicly inside their establishment as a keepsake. This particular bill, the first money earned when the restaurant opened two years ago, had the words "BEST OF LUCK RAILYARD" written across its face in bright red permanent marker. 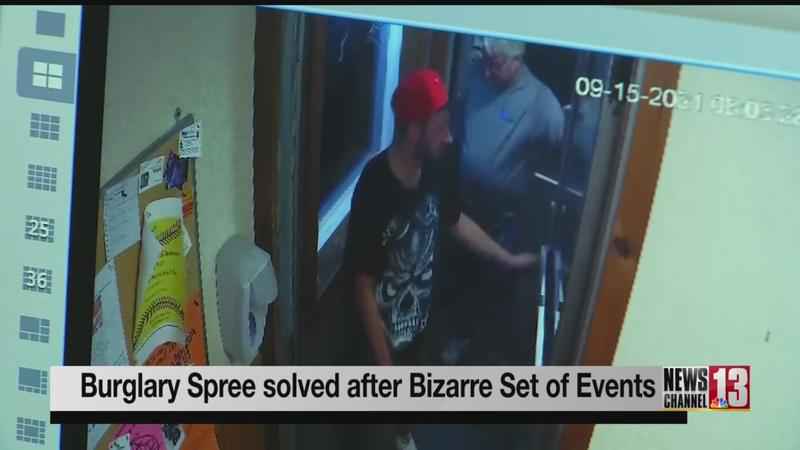 It was that distinction that allowed police to quickly solve the crime, which had become a high-priority for them since the Railyard was the fourth burglary in the village over the course of the past few weeks.

But it took a bizarre twist, and a series of improbable coincidences, for detectives to break the case open.

Just after 6 a.m. Wednesday, a man walked into Putorti’s Broadway Market, just down Broadway from the Railroad Restaurant. That convenience store, it just so happens, is owned by Fra Putorti, who along with his brother Mike, is also a co-owner of the Railyard.

"The twenty dollar bill was taken to my brother’s store," Mike Putorti said, "And it was used to buy cigarettes, lottery tickets, and iced tea."

Surveillance video inside the convenience store clearly shows the bill being passed over the counter, the clerk staring at the unusual writing, and then stuffing it in the cash register.

But that’s not where this story ends. The next bizarre twist came a little later Wednesday morning.

Just after 9 a.m. Wednesday, Aiden Irizarry, who was anxious to cash his paycheck, walked into Putorti’s Market to do it. One of the bills he received was the $20 bill of distinction, which he recognized right away since he happens to work at the Railyard.

"I’m just thankful he didn’t take anything that would have put (Mike) out of business, so we can keep going and keep our jobs," Irizarry stated.

Irizarry brought the bill back to the Railyard where Mike Putorti scanned through the surveillance video to see what had happened and when it happened. But because it was dark during the commission of the crime, it was difficult to identify the burglar.

Fortunately, Putorti’s Market also has a sophisticated security system, and that’s where the culprit’s face was revealed, which allowed police to know his identity since he was someone they had dealt with many times before.

"It’s so bizarre that you would actually steal from one business that a guy owns and then buys something from his other business," Mike Putorti stated.

The suspect has been identified as 33-year old Jesse Tyrell who is charged with eight felonies and one misdemeanor including Petit Larceny (Misd), Burglary (2 counts), Reckless Endangerment (2 counts), Grand Larceny (2 counts), and Criminal Possession of Stolen Property.

Tyrell was sent to the Washington county Jail after his arriagnment, unable to come up with $2,500 bail.