Gov. Kathy Hochul says starting Friday, hospitals with less than 10% of their beds open will have to stop procedures that are not urgent to make more room. It’s part of the executive order signed last Friday to deal with a surge in COVID-19 hospitalizations occurring mostly upstate.

At the top of the governor’s list are several Capital Region hospitals—Albany Medical Center, Samaritan Hospital, Glens Falls Hospital, and Saratoga Hospital. NewsChannel 13 reached out to the hospitals and several were not aware they’d be asked to limit procedures, saying they hadn’t gotten guidance yet from the Department of Health.

Hochul’s order allows the state to use the “surge and flex” system to limit procedures.

“Beginning on Dec. 3, elective procedures at these short-staffed hospitals will cease, and we’ll re-asses that Jan. 15,” the governor said at a press conference Monday.

When NewsChannel 13 reached out to some Capital Region hospitals on the list, they were not aware of the list we were referring to or whether they were on it. 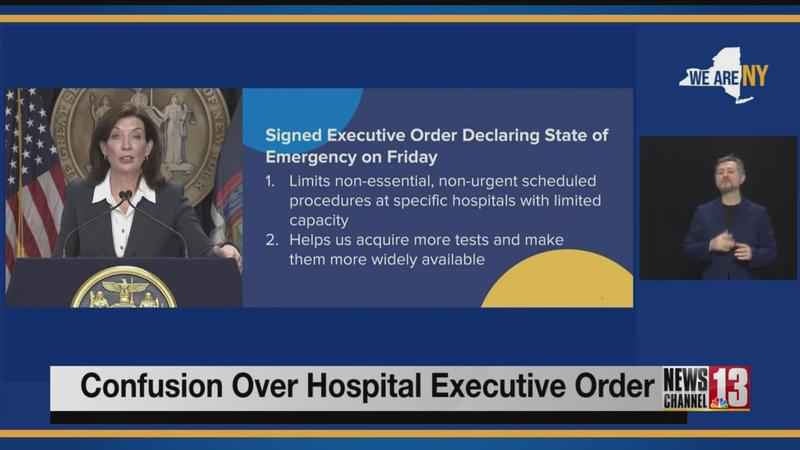 A spokesman for Albany Med said the health system was “awaiting guidance” from the Department of Health.

Glens Falls Hospital told NewsChannel 13 they had not heard from the Department of Health, which helps hospitals implement the order.

“Restricting elective procedures does little to create capacity at our hospital as the majority of cases do not require an inpatient stay and, in many cases, delays patients in receiving needed care,” said hospital spokesman Ray Agnew.

The governor seems to agree, re-defining which procedures are not essential. She says halting mammograms and colonoscopies during the pandemic has done more harm than good.

“We want to make sure that no one puts off critically important preventative procedures as well, as happened during the pandemic the first wave around,” Hochul said.

Her plan is to push some procedures to other facilities.

“Many of those procedures to detect for cancer, mammograms, for example, colonoscopies, they also could be performed at other places other than hospitals,” she said.

Hochul’s office says the list could change, meaning if a hospital’s capacity frees up, they could restart procedures, and those who fall below 10% will have to start limiting procedures.

All hospitals NewsChannel 13 talked to said they’d comply with the order. The governor said she would re-assess the order on Jan. 15.