WATERVLIET – When a group of around 120 Ukraine supporters gathered over the weekend at the St. Nicholas Ukrainian Catholic Church in Watervliet, their primary mission was to pray for peace. A few days later, their mission wasn’t going so well.

"On the one side, I want to believe in hope and nothing major will happen, but on the other hand, we can see on the other side, serious (things are happening)," said Reverend Mikhail Myshchuk, of St. Nicholas Church.

Father Myshchuk has two brothers and a sister still living in Ukraine. The uncertainty of the escalating conflict has lessened his sleep and raised his anxiety.

"I wake up, look on the internet, see what the news is, call my family there and really worry about them," he said. 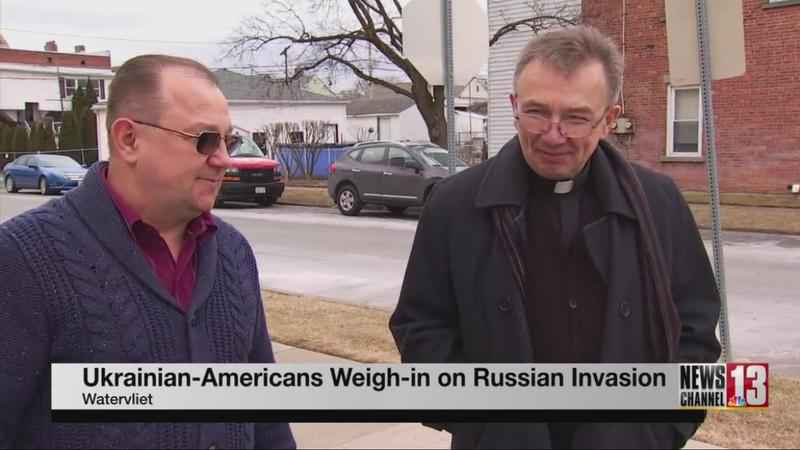 Father Myshchuk is not alone with those actions or sentiments.

"Day or night, we keep track, look on the internet, watch YouTube every day, every minute," explained Taras Myshchuk, who came to America 20 years ago.

Eduard Balashov, a Fullbright Scholar at UAlbany, plans to return to Ukraine later this year when his research project is finished. For now, he’s grateful for America’s financial and military support.

"We don’t know if it’s enough," he says, "It’s a good part of what is needed, but we don’t know what to expect from that man."

As a psychology professor, Balashov feels qualified to psychoanalyze Putin.

"It seems to me that he is a man out (of touch) with reality. He lives in his own world," Balashov stated. "He hears what he wants to hear."