Friends believe adult prom tickets may have been scam

Some people bought tickets for an adult prom at a local hotel, only to find out there was no party there. So they gathered in Saratoga Springs tonight to hold their own prom.

A couple of ladies came to the Congress Park Saturday night to dance the night away.

"We brought a little speaker, and we brought some music, and we got all dressed up," said Deanna Kirk.

However, this wasn’t the prom they were planning to attend. Kirk says she and her girlfriends bought tickets through Eventbrite to an adult prom that was going to be held at the Saratoga Hilton. The organizer of the prom is listed as Broadway Events.

"We received an email on Wednesday stating that we were receiving a credit for the prom for no reason as to why it wasn’t happening," said Kirk. 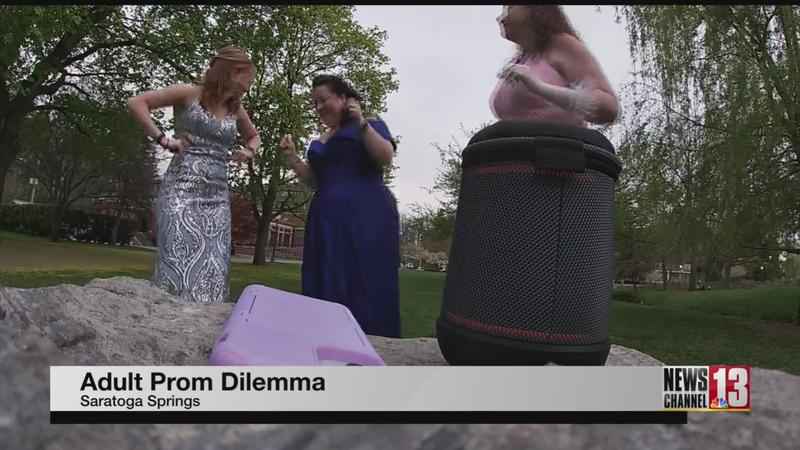 Kirk says she contacted Eventbrite and the organizer and got no response.

"So they inquired about hosting the prom, but they never signed a contract confirming that they were actually hosting the event," said Kirk.

Melissa Briggs was excited to go to the event with her daughter, Emily Dudka, who drove all the way from SUNY Brockport. They were both upset about what happened.

"We both bought a new dress. I don’t have a prom dress anymore. I’m kind of old for that. We bought accessories, and she drove all the way to do this. So I spent $700 on this event that I won’t get back," said Briggs.

Dudka was looking forward to this because she didn’t have the prom she wanted in high school.

"I graduated the year after, like, COVID ruined everything. So my prom was not great," Dudka.

The ladies say they haven’t gotten a refund and are hoping to get to the bottom of what happened. But for tonight, they wanted to have some fun.

"We’re going to try to make the most of a really crummy situation," said Kirk.

At the moment, it’s not clear who reached out to the Saratoga Hilton to inquire about the prom. NewsChannel 13 reached out to Eventbrite and Broadway Events, but have not heard back.