Friends of marina fire victim rally to help him out

The man caught in an explosion and fire at the Coeymans Landing Marina remains in critical condition. Eric Allen was severely burned in the incident on Jan. 20.

NewsChannel 13 is told Allen was welding near a waste oil tank., and the sparks may have caused the explosion.

He is being treated at Mass General.

Meanwhile, a couple friends have been helping him out by checking on a swan Allen took care of before he was injured.

When Allen would go to work at the Marina, he would take care of Hudson, the swan. He would feed him and make sure Hudson had everything he needed. Allen even documented their adventures on Facebook. However, on January 20, Allen suffered severe burns. Allen was airlifted out of state due to his injuries. 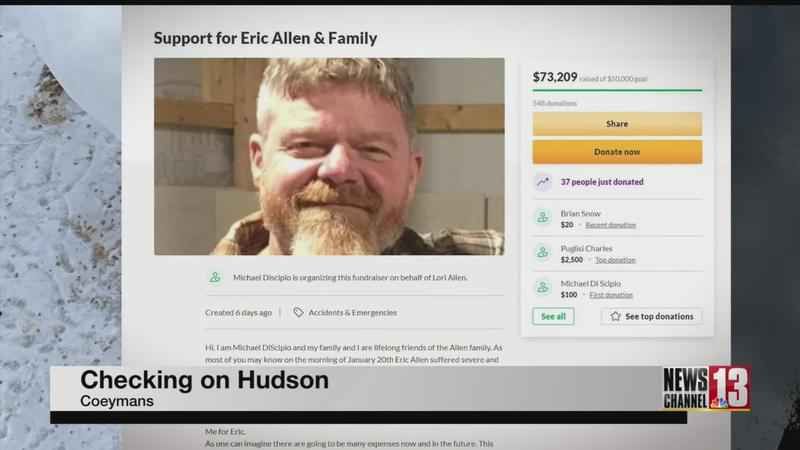 Barry Tynan and Amy Tynan are brother and sister. They are also friends with Allen. They wanted to make sure Hudson was taken care of while Allen was recovering. Barry Tynan says he has come out a couple of times to check on Hudson.

"It’s very important, I think, because I know him. He would be very happy to know that swan is taken care of, so it makes us feel better, you know, doing something for him," said Barry Tynan.

"If you know Allen, you know that the heart he has. Anything you can do, even the small things, mean a lot to him, and we know he lives with Hudson, so he has a lot of people out here. So, this is for him and his family. It just makes you feel closer to him. The little things you can do," said Amy Tynan.

A GoFundMe page has been created to help the family.