Funeral held for trooper who drowned on Sacandaga Lake

Family, friends and law enforcement members are saying their final goodbyes as a state trooper is laid to rest.

Hundreds of state troopers, police from Schenectady, Colonie, the sheriff’s office and even Gov. Kathy Hochul lined up Monday to pay respects.

The group saluted Trooper Monda as his remains were escorted into the church by dozens of troopers.

Monda was working a marine detail on the Great Sacandaga Lake when he entered the water and didn’t resurface. He later died at the hospital. State police noted at the time that Monda was not part of state police’s underwater recovery team. 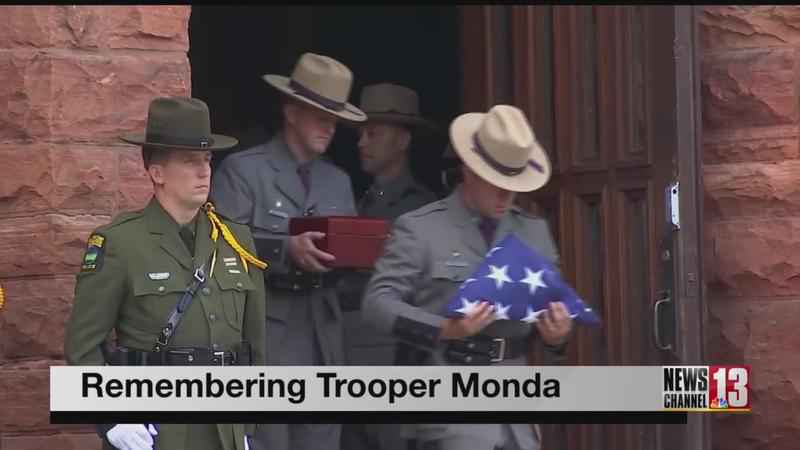 This is really a big loss for the community and Troop G.

The 45-year-old Schenectady County native spent 18 years serving as a state trooper and spent most of his career right here in the Capital Region. His last assignment was serving in Princetown.

State Police Superintendent Kevin Bruen and Major Christopher West say Trooper Monda was always someone you could count on.

"One of his fellow station mates was saying how he was the guy that you can go to, not only because he was the senior member of the station, but just because he was that person that will go help you out with any kind of chore any things you need at your house or personal things. He was a jokester, too, and well liked, and got along with everyone," said West.

They both say this was about making sure Monda got the proper send off.

New York State Police Trooper James Monda dedicated his life to protecting the State and the people of New York.

Today, alongside his colleagues, family and friends, we honored his bravery and sacrifice. May he rest in peace. pic.twitter.com/LvV1i1EEIz

Law enforcement officers lined up to honor the life and legacy of Trooper James Monda. Gov. Hochul will also be in attendance at the funeral this morning. @WNYT pic.twitter.com/bt5GsnpVmq — Sam Hesler (@HeslerSamWNYT) August 30, 2021

A funeral service will be held this a.m. for Trooper James Monda in Schenectady. Monda was working a marine detail on the Sacandaga and drowned. Many law enforcement officers are here to pay their respects. @WNYT pic.twitter.com/5Z4iRrkvVX