GLOVERSVILLE – The shepherd mix, roughly six months old, is being evaluated at the Fulton County Regional SPCA in Gloversville, after being found tied to a shopping cart near a creek Sunday.

Dennis Bingham, who lives nearby, found him after hearing him cry.

"And he was tied," said Bingham. "At first I thought he was trapped or something, and then I kind of went back, I got my water shoes on and trudged across the creek and went over there and realize that somebody had basically abandoned him and tied him to an old grocery cart that was buried in the ground."

A post by the shelter has been shared thousands of times. 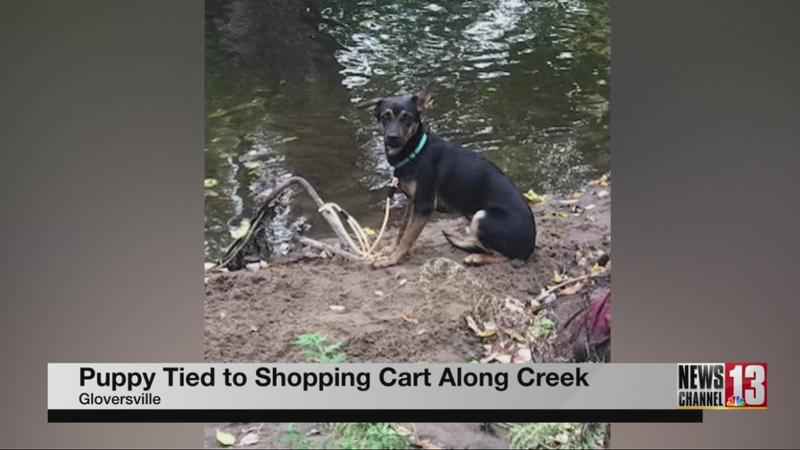 Shelter officials are happy Dennis came along when he did. Their upcoming event October 30 is about taking action to help animals.

"We always say if you see something, say something. The best thing you can do is report something that you see that in your gut just doesn’t seem right," said Fulton County Regional SPCA’s Renee Earl.

NewsChannel 13 spoke on the phone to Cheyenne Baird, who says she and her best friend are the dog’s owners, after rescuing him two weeks ago.

She says she simply left him with an ex-boyfriend’s family for a night, when she went out of town to make sure someone was caring for him.

She says she wants him back.

"I would never treat a dog like that," she said. "I would never do that to a dog. I have two other dogs. They’re perfectly healthy and if anybody would like to see them, they can."

Dennis Bingham is just happy he was able to help, and maybe save a life.

The shelter has been getting a lot of requests from people who are interested in adopting the puppy, but the case is still pending.

The Fulton County Regional SPCA event on October 30 is "Identifying Animal Cruelty and What YOU Can Do About It." It’s from 9 a.m. – 1 p.m. at the Holiday Inn in Johnstown.