In Albany, hundreds came out to support Gold Star families at a parade and wreath-laying ceremony. It’s the first Memorial Day gathering in the city since the pandemic.

"Today I feel like my spirits were really lifted, and I’m honored to represent the Gold Star mothers as well," said Mary Elizabeth Jenks, one of two grand marshals of the parade.

It’s been just more than a year since her daughter, Specialist Abigail Jenks, was killed in a training exercise at Fort Bragg in North Carolina. Abigail was a combat paratrooper.

However, this Memorial Day, her boots were on the ground, marching forward. 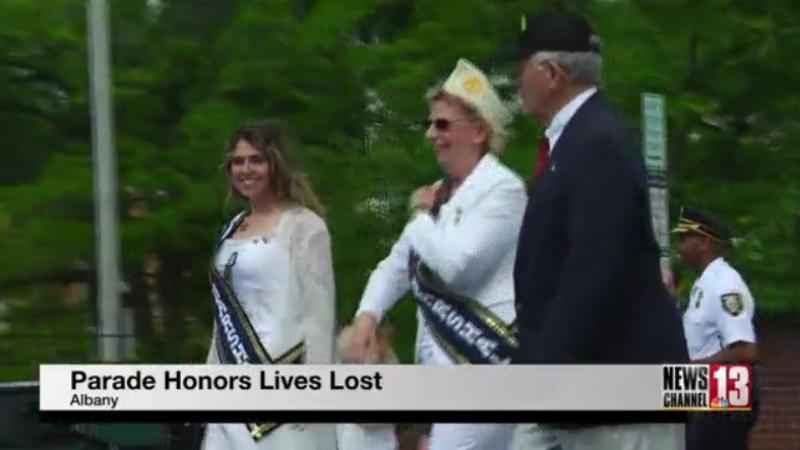 "These were the boots that she wore the last day that she jumped from the Black Hawk helicopter, that she never got to take off," Jenks said, gesturing to her boots. "I’m just grabbing that flag from her and continuing on, like we all can do."

She wants people to know her daughter was a trailblazer at just 20 years old.

"She was the first female soldier to sign up in the combat role in the Capital Region," she explained.

Abigail was also an artist. The family is getting ready for an exhibit featuring her work at Eden Cafe at 269 Osborne Road in Loudonville next Friday. The show will benefit homeless women veterans by supporting the Veterans & Community Housing Coalition. The exhibit premieres at 6:00 p.m. on Friday, June 10 and runs the month of June.

"You can see it in her art, too, where she just progressed and she drew her whole life. Sometimes we have hobbies that we kind of drop here and there. Abby kept the same one, and she perfected it," Jenks said.

She continues to march on with Abby’s boots, spreading her daughter’s mark on the world every day.

"Abigail was a very positive person, and one of her quotes she used to say was that every day may not be a good day, but there is something good in every day," she said.

A group of students from the Capital Region are raising money for a scholarship in Abigail’s honor, to provide financial assistance for enlisting military members from Saratoga Springs High School, her alma mater. You can click here to help them reach their goal.

The parade also honored another Gold Star mother with the title of grand marshal.

"It’s a tough weekend, it’s hard. But the thing is, we want to remember our daughters, and we want folks to not forget how they lived," said Cindy Roberts, who also serves as President of the Department of New York American Gold Star mothers.

Roberts is remembering her daughter, Sergeant Kristie Roberts, who served in the Army National Guard and Air National Guard, and later as a paramedic for Clifton Park Halfmoon EMS.

She says there are days like Monday, when she can step out as grand marshal of Albany’s parade.

But nearly a decade after her daughter’s death, there are still days she takes life minutes at a time.

"Just know, okay, I got that far, I got through that five minutes, okay, I’ll get through another five," Roberts explained.

Kristie died by suicide when she was 27, one of an estimated 22 veteran suicides a day, according to the Department of Veteran Affairs. Roberts is shedding light on the internal struggles many military members endure in private.

She’s now spreading a message to other military members that it’s okay to let someone else share the load you’re carrying.

"Anything that we can do so that folks know if you have a dark day or a hard day, share it, call, talk to somebody, you’re important, and it’s okay to not be okay. It isn’t just you, and you’re not alone," she said.

If you or someone you know is struggling, you can reach the National Suicide Prevention Lifeline at 1-800-273-8255.