Kevin Kelly, a Greene County resident, reached out to 13 Investigates months ago, concerned about the safety condition of the Catskill Creek train trestle.

Kelly has lived near the trestle for more than 50 years.

"Driving past it at 30 miles per hour, you don’t really get to check it out good," Kelly said.

So he decided to get out of his car one day for a closer look. 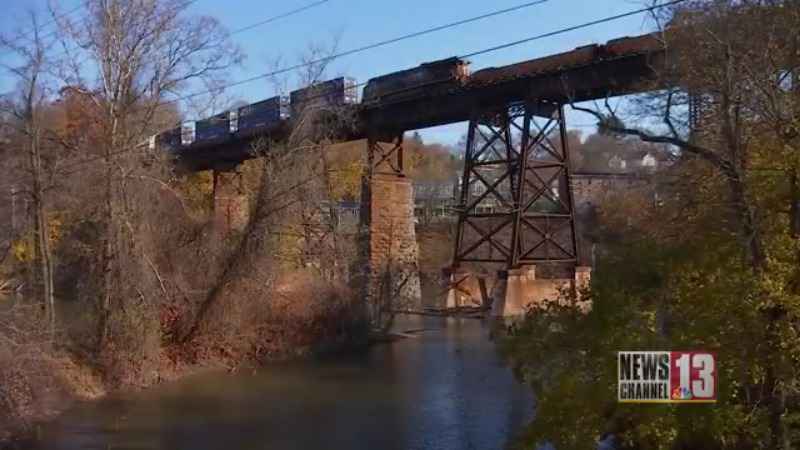 The train trestle over the Catskill Creek in Greene County.[WNYT]

"I decided to come back in warmer weather and really get out of the car and take a good look at it, see what was going on and when I did, I was really shocked," Kelly added.

Shrouded with vegetation and deteriorating, Kelly immediately grew concerned for his community.

"The more I would drive by it, the more I’d look, the more I’d see more cracked stones, stones that are out of place…" Kelly explained. "It not only puts people’s lives in danger, it’s train cars that are loaded with petroleum and toxic chemicals if they were to dump into the Catskill Creek here and the Hudson River is just downstream a little bit, it would be a terrible disaster, environmental disaster."

After finding a picture online of the trestle that dates it back to at least 1884, Kelly said he grew even more troubled, so he said he made a call to state Sen. Michelle Hinchey.

"I found it on a website, it’s a picture of the train trestle as it appeared in 1884 in scientific American," Kelly said. "I think it was the April edition of that year. It’s 12 hundred and 22 feet long, 137 years old, and I don’t think it’s really been inspected in all that long."

But according to the Federal Railroad Administration, that isn’t the case.

13 Investigates originally reached out to the FRA and asked for inspection records. Our team was surprised to find that they aren’t available to the public.

According to the FAST Act, passed by Congress in 2015, railroad inspection reports are not public record. It stands for Fixing America’s Surface Transportation.

On the FRA’s website we found, under the act, "only a duly elected or appointed official of a state or political subdivision of a state, acting in his or her official capacity may file a request for an inspection report."

However, the FRA did tell us the most recent inspection on the Catskill Creek trestle was done in June 2021. The FRA told 13 Investigates, the inspection found the trestle is experiencing deterioration at varying levels, consistent with pictures Kelly originally sent to 13 Investigates when he reached out.

The FRA added, none of the existing conditions identified affect the ability of the bridge to safely carry current traffic.

They also pointed out that the railroads are responsible for conducting inspections, so we reached out to CSX, which owns this track.

In an email, we asked CSX to describe the inspection process. We also asked them how many inspectors are involved and what type of equipment is used.

CSX did not send answers, but did send a video link from the Association of American Railroads website which show a team of inspectors and a truck with a bucket to get workers underneath the trestle.

13 Investigates asked several times if the video represents what has happened at the Catskill Creek trestle and when, we received no response. The Association of American Railroads also denied our request to use the video on their website.

Rep. Paul Tonko voted for the fast act. His office tells us he supports infrastructure, and the issue with the inspection reports was not part of the debate on this bill.

The bill did create a portal that allows local and state lawmakers to request inspection reports, but not the public or the media.

Tonko’s office also tells us they will look into the transparency issue and see if anything can be done to change that.