The huge fire that destroyed a building Sunday in Greenwich is the work of an arsonist. That’s according to Cambridge-Greenwich police.

One person was sent to the hospital after the fire tore through the building on Main Street, which houses apartments and a few businesses. Eight people were left homeless.

The fire started Sunday morning, and the efforts to put it out went on until after dark.

Police say a man staying with a friend in a second-floor apartment started the fire, then jumped out and ran away.

They found the suspect, John Fox of California, with the help of state police and a Washington County Sheriff’s Department K-9. He’s charged with second-degree arson, criminal mischief, and reckless endangerment.

#BREAKING According to sources, the fire that destroyed the building on Main Street in Greenwich is the work of an arsonist. Police tell me a man who a friend allowed to stay in a second floor apartment in the building started it on fire and then jumped out. @WNYT pic.twitter.com/QadHhKG7PT

"It was sad. It’s a historic building. Everybody in the community knows that building," Greenwich resident Adam Caitlin said. 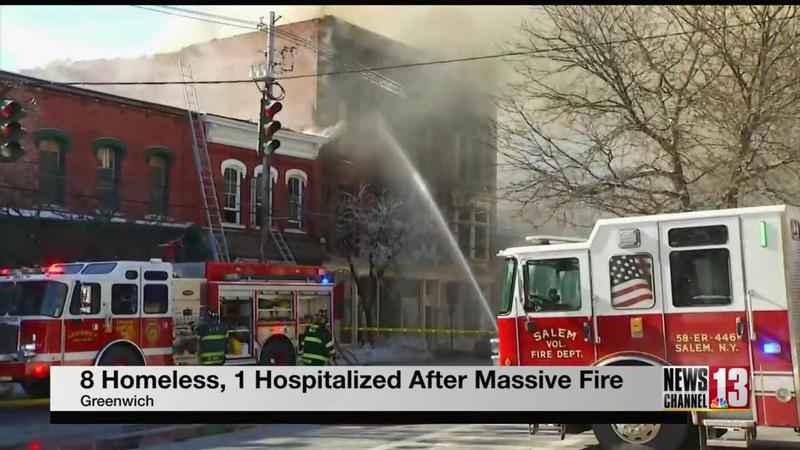 "I feel Greenwich has a special bond with the people that live here. The community will come together, and we’ll get through it, but it’s a sad day for sure," he added.

The Greenwich fire chief says the building will probably need to be torn down.