About a week and a half ago, Patrick saw him burrowing out of the yard and went to get him. He says the dog was just outside the yard.

"And as I came around the fence, I heard a crack, and then my dog started yelping and came running straight toward me," he said.

Patrick says then he saw someone walking down the hill behind the house.

Soon, packing up for a family outing, he realized something was very wrong. 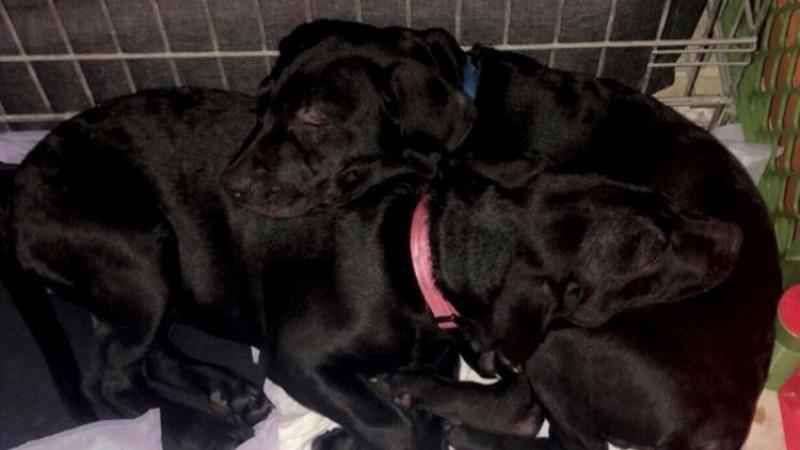 "I was going to take out the strollers to put them in the garage and put the cooler in the back of the van, and I noticed I had blood on my hand," said Patrick, whose last name Newschannel 13 is withholding.

X-rays show a piece of ammunition lodged in the dog.

Chase’s wound looks exactly the same as the one suffered by his sister Skye in October, also near the house.

They were rescues from the same litter.

She died after the family spent thousands of dollars trying to save her.

Patrick, who served 10 years in the Marines, and Tiffany, a nurse, have shored up their fences and put in security measures. Both are working extra hours to pay the vet bill.

They’re worried something might also happen to their three children, all under the age of 5.

After Skye got injured last year, they had concerns about letting the children play outside in their yard.

"We were just hoping for the best," said Tiffany. "At that point we stopped using the back half of our yard. But since this happened (about a week and a half ago), we don’t go back there at all anymore."

They say Chase wasn’t roaming or going after any livestock. This is a residential neighborhood.

"I think it’s completely disgusting and wrong," said Tiffany. "I don’t know how anyone could hurt an animal, especially a friendly family dog. More than once! Especially when there are kids involved as well."

The family would like to thank the Capital District Veterinary Referral Hospital in Latham.

The couple is thankful to Guilderland police for their work on this case.

They’re asking anyone with information to come forward.