HADLEY – Investigators are looking into a burglary that happened at Hadley Town Hall.

When someone smashed through the front window at Hadley Town Hall some time over the past couple of nights, they left behind shards of broken glass scattered on the concrete front porch, but what they left inside the building was a proud daughter’s broken heart.

"I didn’t know him well," said Kathy Trackey, the Hadley Town Historian said of her deceased father. "There’s not a lot I know about him, just some little bits and pieces, so it’s really hard."

Trackey was 7-years old when her father died in February 1970. She has few things to remember him by, Private First Class Edward Shaw served in the European Theater during World War II with the 8th Infantry Unit.

The medals, ribbons, and commendations he received, including a valuable Purple Heart, had been on display inside the Hadley Town Hall, until the other night when someone smashed the front window and made off with the military treasures. 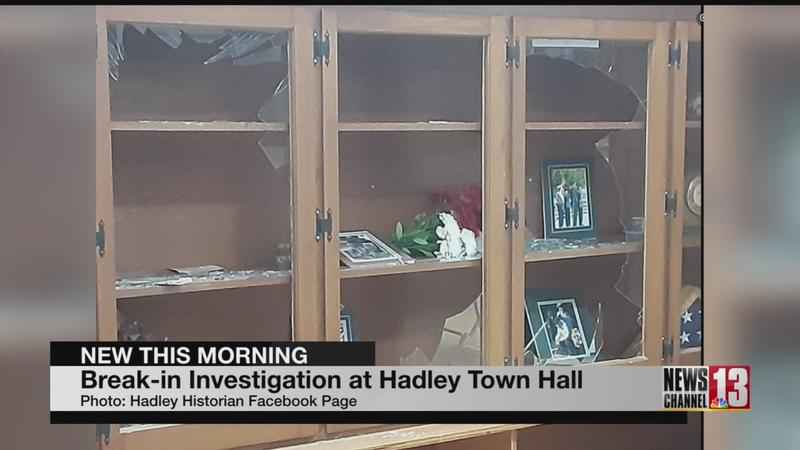 "He was just a man," Trackey recalled. "He came back (from war) battered, and he had me late in life, lost me, and I lost him very young."

"It’s personal for her," stated Hadley Supervisor Arthur Wright, "It’s really the only ties she had to her father. She had a couple of things. She was proud of it. She displayed it here in our case. Unfortunately, somebody thought they needed it worse than she did."

Supervisor Wright theorizes someone appearing in town court, which is directly adjacent to the display case, likely spotted the items, and then came back to get them, which is why he and Trackey believe the list of suspects is short.

"I’m not sure if it was somebody who needed money and had to feed their kids," Trackey wondered. "Desperate times, and it’s sad that they had to break in here."

Equally troubling for Kathy, the high likelihood that the person responsible is probably a town resident, and in a small community such as Hadley, that’s further reason to believe there are very few suspects.

According to a Facebook post on Hadley Historian posted on Monday night, the burglary also resulted in a display case dedicated to deceased veterans being damaged.

If you have any information, you’re asked to contact New York State Investigators in Wilton.