Henri Timeline: What you can expect 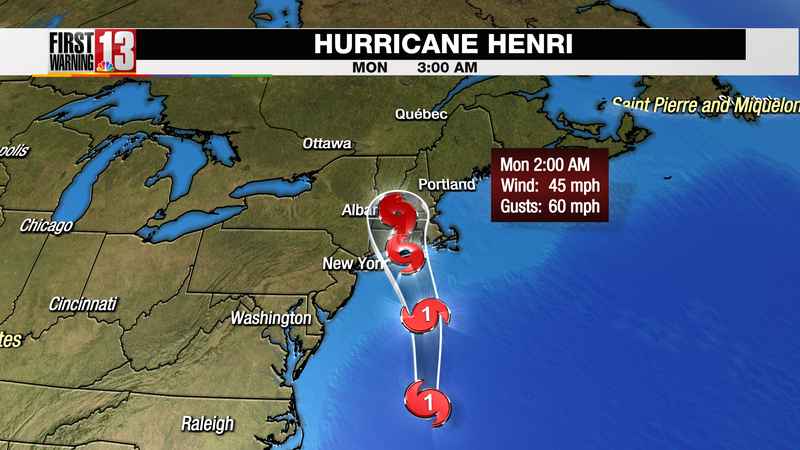 According to the latest National Hurricane Center forecast, Henri will be either a strong Tropical Storm or weak category 1 hurricane strength as it makes landfall across eastern Long Island or southern New England early on Sunday afternoon. Once it makes landfall, a closed upper level low will capture the storm and move it back to the northwest, as it rapidly weakens inland. Despite this, very heavy downpours are expected.

While it may be dry to start at daybreak, bands of showers will be moving in from the east during the day on Sunday. Most areas from the Hudson Valley eastward will be start to see rainfall from the afternoon on. Rainfall rates may exceed one inch per hour within the heaviest bands of rainfall. At this time, a rumble of thunder cannot be ruled out. The heaviest rainfall across our area looks to occur from some point later Sunday afternoon through Sunday evening and into the first portion of Sunday night. This will ultimately depend on the exact track and timing of the storm, so this is still somewhat in question. Heavy rainfall may be stronger across the high terrain, especially eastern facing slopes of the Catskills, Greens and Berkshires. With our area on the western side of the storm, there won’t be a tornado threat.

Winds will be picking up through the day, but most gusts will be under 25 mph. The best chance of seeing some gusts of 25 to 50 mph will be in the narrow corridor right on the western side of the circulation as it passes across New England, although this may not be until later Sunday evening into Sunday night, depending on the exact speed and track of the storm. For our region, Berkshire County has the best chance to see gusts that high.

The official forecast is for the storm to lift across New England while falling apart on Monday into Monday night. There will continue to be periods of showers and some isolated thunderstorms for Monday into Monday night, although intensity will be somewhat lower than Sunday. However, this rainfall will still add on to any flooding concerns that will be ongoing already.

The forecast may still change if this storm changes track, so stay with us as we update you on any changes we have.