High Use in the High Peaks Part II: The Solutions

KEENE — When it comes to managing the current problems with the amount of hikers in the Adirondack’s High Peaks region, priority number one for DEC Commissioner Basil Seggos is Route 73 below.

“My biggest concern is seeing cars stacked at trailheads, and risk the people who are getting in and out of their cars. God forbid anybody gets hit,” said Seggos.

The relatively new ‘no parking’ signs at Giant Mountain are not deterring all hikers yet. This past holiday weekend, cars were lined up in the no parking zone with tickets left on windshields. The DEC says 150 parking tickets were handed out this past weekend along the entire Route 73 corridor. 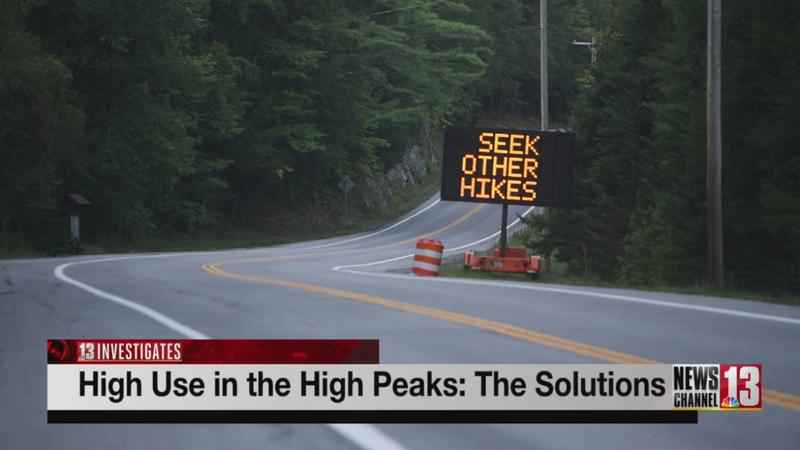 Route 73 runs right through Keene, Joe Pete Wilson is the town supervisor. Here’s what that behavior, tells him.

“People are determined to meet their goals,” said Wilson. “When they decide they’re going to hike Indian Head or Giant. It’s tough to deter them, if you’re not reaching them until they’re trying to park.”

Here’s what Seggos said about the idea of significantly expanding parking lots at trailheads in that corridor:

“You can’t expand the parking lots at those locations, there’s just no room. That corridor in particular,” said Seggos. “There are very steep cliffs on one side and water on the other. Even if forest preserve constitutional protections didn’t exist, you’d have limited place to move people. So the shuttle system is the only answer to that corridor.”

Shuttles are a tough sell during a pandemic, but that’s a long term solution for the DEC.

Then the issue of the trails.

An Adirondack Council assessment in 2018 found 130 miles of trails in the High Peaks alone that are too steep, too wet, or otherwise unsustainable. Another of the Council’s studies found 56 percent of the trail mileage in the High Peaks "fails to meet the modern design standards for sustainable trails". The Council argues parts of many trails need to be redesigned and reconstructed.

The issue of trail erosion has been talked about for decades in the Adirondacks. The DEC said this in its High Peaks Unit Management Plan, published in 1999:

"Most trail problems are the result of poor trail location and improper construction and maintenance rather than the amount of use. Some trails are over 100 years old and were initially located to achieve the shortest distance between two points or where construction was easy. Their poor location often makes erosion control difficult."

New York is already working on a new trail to Cascade Mountain from the state’s Mount Van Hoevenburg facility. Ideally, it will be a facility and trail that can handle the needs of 35 thousand hikers a year.

Some float the idea of a center or hubs to provide ideas for alternate hikes, and a notification system if parking lots fill up.

When it comes to trash and toilet paper, four groups in the Adirondacks agreed last year they want front-country stewards and information at trailheads. People who would educate hikers on how to respect the environment, even how to use the bathroom in the woods. People who can do a job like Tyler Socash.

“I’m totally committed to their numbers. Making sure they, not only have the right force, that they have the right support from assistant forest rangers and other divisions,” said Seggos.

Seggos says he’s committed to a new academy if there’s money in the budget.

In our interview, Commissioner Seggos said he’s open to almost all of the ideas from the groups we brought to him.

But there is one hot button issue in the Adirondacks: permits. The idea of needing a reservation to get to a hike’s trailhead.