Gov. Hochul gave an update on COVID cases in New York state on Monday, including making sure kids stay in school.

Speaking from Rochester, Hochul reiterated her shock over the growing number of COVID cases across New York, but she also mentioned she was grateful because the illnesses are less severe than they were before mass vaccinations began.

Among Hochul’s top priorities at this point: first and foremost is to keep kids in school, to make sure people continue wearing masks and get themselves tested, and to prevent serious illness and deaths.

The governor also refused to sugarcoat our current predicament: stating we are not in a good place. The post-holiday winter surge that had been predicted is occurring, and numbers will continue to rise as long as human interaction continues. 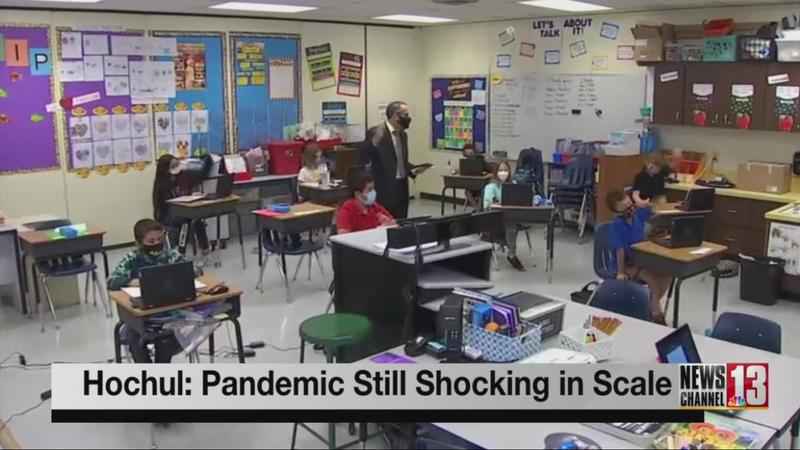 Hochul points out less than a third of young school age children have been vaccinated so far, and her mission is to make sure those numbers rise quickly and significantly.

"We need to get those numbers up – 29% 5 to 11. If we get that high, we get that up to 50%, 60%, 70%, 80%, you don’t have to worry about when they’re in school at all. That eliminates the worry," said Hochul. "I don’t know why any parent would allow that to continue where you know there’s something that could help them. You’re not the first, you’re not the second. There have been hundreds of thousands of children already vaccinated so safely. So come on, let’s protect our kids and make sure that their lives can continue on."

The governor also mentioned that new testing sites will be opening across the state beginning Tuesday, including one at UAlbany.

Learn about those by watching the video of Dan Levy’s story.