ALBANY – Housing advocates were rallying across New York on Tuesday. A couple of those advocates gathered outside Albany City Hall. They are calling on Gov. Hochul and the New York State Legislature to pass the "Good Cause Eviction Bill."

At Tuesday’s rally were advocates from VOCAL-NY and people who had first-hand experience dealing with eviction.

New York’s eviction moratorium expired on January 15. According to VOCAL-NY, nearly 200,000 people are newly at risk of facing eviction. They believe the "Good Cause Eviction Bill" would help prevent more people from being homeless. 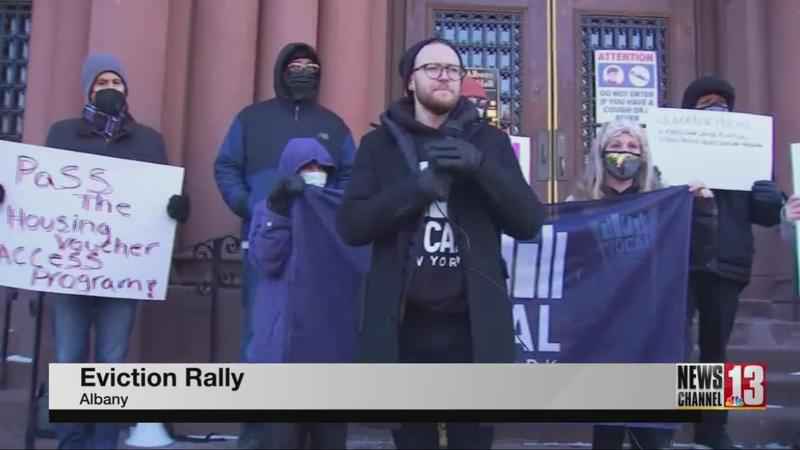 The advocates argue that landlords can evict someone now without a good cause. For instance, they are claiming some landlords evicted tenants for simply asking for repairs to their property.

"Housing is a human right. No it’s not conscionable for us to be in the richest, wealthiest state in the country and not to house our people, and so we really need them to act urgently and to act now," said Luke Grandis, with VOCAL-NY.

However, some landlords say they are not in favor of the bill. In addition to the passage of the bill, they have additional demands. They want New York to pass the "Housing Access Voucher Program," which would provide 200,000 housing vouchers for people living in New York state.

They also want to fully fund the "Housing Our Neighbors with Dignity Act." This bill takes dilapidated buildings and converts it into sustainable housing.

Housing advocates say some people are afraid to report code violations, because they fear their landlords will evict them.

Hear from one landlord who says that’s not the case, by watching the video of Jonathan Hunter’s story.