HUDSON – Police had a ceremony to honor city carrier Deb Maher for helping an elderly man in distress.

Maher has been working in Hudson for the U.S. Postal Service for almost 20 years.

About two weeks ago, on her route, she saw mail at a home was untouched.

"I noticed he still hadn’t picked up the mail, which was highly unusual because he gets a lot of mail," she said. "I banged on the doors, windows, no response whatsoever, and so I said it’s time to make the phone call." 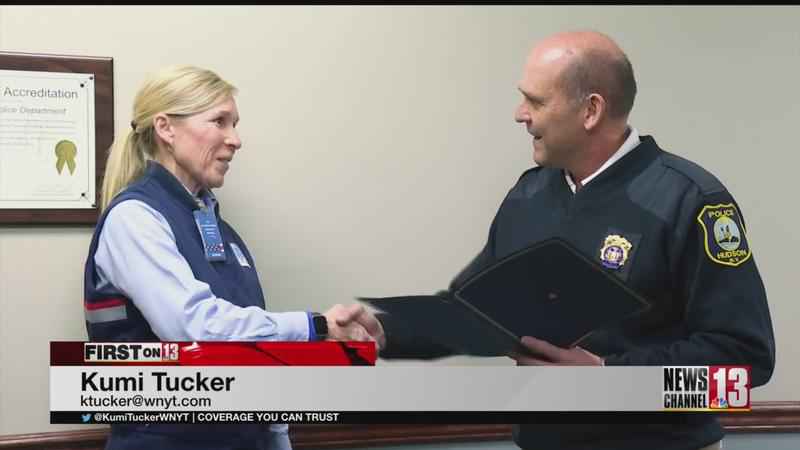 Sergeant Nick Hodges and Officer Jessica Mausolf got into the home and found the man alive, lying just behind the front door.

He later passed away. The chief says because of what Maher did, the 79-year-old had comfort, care, and dignity in his final days.

"Members of our community heard what she did," said Hudson Police Chief Edward Moore. "It kind of caught on that people have a raised interest in looking out for one another. I think it was a good story."

The chief says it seems already to have inspired others to look out for one another.

"So that to me, that’s something that’s helping," said Maher. "Like Chief Moore said, it might only last a month, could last a couple months. Hopefully it’ll last longer. It’s just bringing the awareness to look out for your neighbor. If you see something out of the ordinary, maybe say something."

Letter carriers, like officers, see a lot, and get to know people and places well.

"We have a very good grip on who our community is," said Hudson Police Commissioner Shane Bower. "We know our neighbors. We know the people, and we know when something is off. So for her to just be who she is and realize something’s not right here, I need to call, that was awesome, that was amazing."