The investigation report from the New York State Assembly Judiciary Committee about the allegations against Gov. Andrew Cuomo is making a strong statement.

"Times they are a changing. No longer can those in positions in public power humiliate, verbally attack those who work in government."

The judiciary committee was charged in March to do an investigation into Cuomo and local lawmakers says the report is very complete and very thorough. 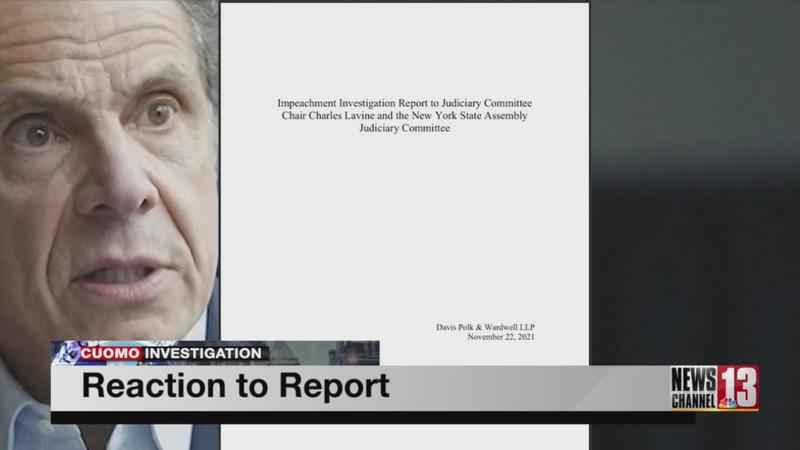 McDonald said he finds it surprising the former governor did not defend himself more.

There are some critics.

Senate Republican Leader Rob Ortt said in a statement, "It is only because of intense public pressure that these findings were finally made available."

Lavine has his own thoughts about this:

"I will again defend their right to be wrong. The investigation is tremendously significant," Lavine said.

The findings in this investigation will be shared with local law enforcement authorities.

"Any report that uses the Attorney General’s politically biased investigation as a basis is going to be equally flawed. To date we have not been allowed the opportunity to review evidence in the Assembly’s possession, despite requests to do so and due process was certainly not afforded here.

"Once again, the fact that an employee entered and exited the Executive Mansion as part of her job was never in dispute and once again this report offers no evidence to support any allegation. What is interesting is that the Assembly didn’t even try to prove Tish James’ bogus "11 legal violations," and instead only focused on two. When all the facts are fairly weighed there will be none.

"To be clear, the people who volunteered to work on the book were people mentioned in the book and therefore they were involved to make sure the representations concerning them were accurate. Staff who volunteered took time off, evidencing that they were volunteering and not on state time. Any suggestion to the contrary is Assembly hype. The people who volunteered were senior members in the administration and were highly sophisticated in terms of official activities and volunteer activities and had performed both many times in the past. During the time period in question Robert Mujica, Beth Garvey, James Malatras, Melissa DeRosa, Gareth Rhodes, and Stephanie Benton, all mentioned in the book, reviewed it at no cost to the state. Junior staff working on Covid materials were not helping on the book, but were helping on the state’s Covid response.

"The Assembly report is hypocritical, revisionist and damns themselves as the Assembly effectively forces employees to volunteer on their political partisan campaigns as standard practice and if they want to debate it we welcome it. Let them start by disclosing which staffers also do political work. Will the Judiciary committee members that raised the issue disclose their staff members who volunteer to work on their campaigns and if not why not?

"They apparently couldn’t find a similar distraction from priority testing after we pointed out the hypocrisy that multiple Assembly members, including members of this very committee, along with staff and family members, were provided testing when asked. That’s why the matter was dropped altogether from the report. However, the Assembly’s duplicity must not be allowed to go unanswered. They must disclose what members, staff and family members received priority testing. They were highly critical of priority testing, but are now silent on who in their house received such testing. They must stop their cover-up.

"The conclusions that the DOH report on nursing home COVID transmissions was accurate, that there was no evidence that the March 25 order resulted in additional fatalities and that we received constant reassurances from the Thruway Authority that the bridge was safe by no means suggests that this was a fair and balanced report.

"The truth will come out."

"The Assembly’s report simply parrots the Attorney General’s flawed report, failing to engage with the many errors and omissions in the AG’s report and her one-sided, biased investigation. And, like the AG, the Assembly refused to provide the former Governor with access to all the evidence, again denying the Governor due process and a meaningful ability to respond. This is disappointing, but hardly surprising."