The members of the state Assembly Judiciary Committee are continuing to review the final report on former Gov. Cuomo’s conduct in office.

It was expected the remaining seven members of the 20-member judiciary committee would stop at the committee chairman’s office on the 8th floor of the Legislative Office Building Friday to review the report.

Among the lawmakers who stopped by on Friday to read the report is Colonie Assemblyman Phil Steck.

After reviewing the report, Steck says there is absolutely 100% proof that the former governor should have been, and would have been impeached based on testimony and evidence contained in this report. 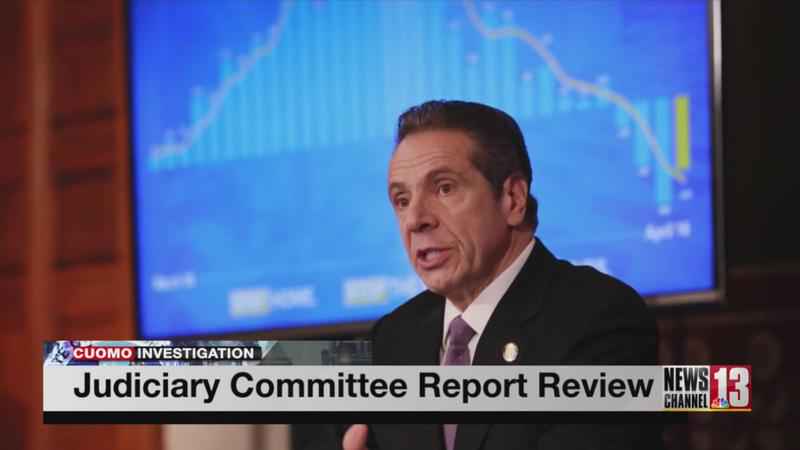 The 45-page report is based on testimony from 165 witnesses. There was information gathered from 600-thousand documents.

NewsChannel 13 is told the former governor provided neither testimony nor evidence in the making of this report.
Steck says to him, the report reflects the hubris, the heavy-handedness, and the above-the-law mentality that he believes characterized the Cuomo administration.

"I think the report is outstanding, thorough. I think it buttresses the conclusions of the attorney general’s report," said Steck. "I think it’s a very strong body of work. I think on the sexual harassment, there’s absolutely — absolutely no doubt that the governor was involved in sexual harassment."

"Under the state’s constitution and the relevant case law, we can no longer impeach him. That’s just gone," said Assemblyman Mike Montesano, a Republican from Long Island and the ranking minority member of the committee. "However by holding him accountable to the public, because he’s out there making noise about he’s going to come back and run for office — no one is going to want to deal with him after they see that. But how he can held further accountable is for these outside law enforcement agencies to step in and hold him criminally accountable, both on the federal level and on the state level."

Judiciary Chairman Charles Lavine says he expects the report will be released to the public in the coming days.