After 70 years, the family of Walter Smead laid him to rest Monday at Saratoga National Cemetery.

NewsChannel 13 has followed this story for months.

Smead went missing in the Battle of the Chosin Reservoir during the Korean War.

His niece says her family is relieved to finally have him home.

"It’s really important for our family. This closure has been 71 years in the making," said Bonnie Wolff, Smead’s niece. 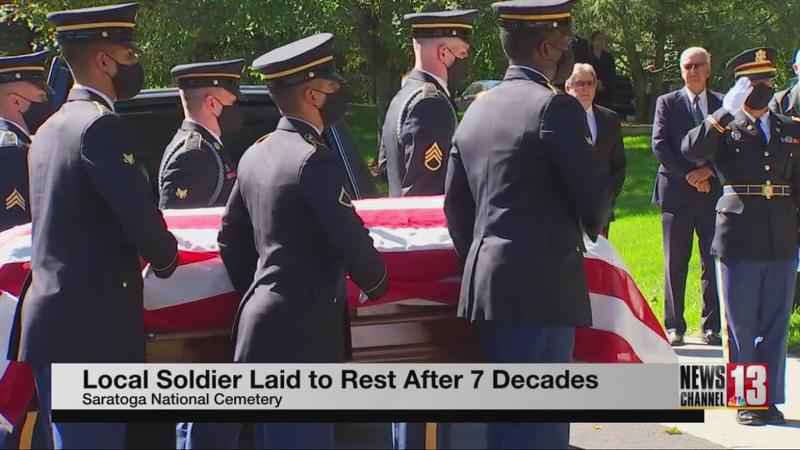 For seven decades, Wolff’s father waited for her uncle, Corporal Walter Smead. He was never heard from after the battle of Chosin Reservoir.

"Gosh, right now it’s a huge mix of emotions. There’s some sadness, but there’s also some intense joy, and some pride, and some patriotism. It’s really a mix of feelings," Wolff said.

Pride and patriotism brought together two leaders who rarely appear together — the department commanders of New York’s VFW and American Legion were both at Monday’s ceremony.

"Both of our organizations, the core of what we believe in, is that we bring everyone home. This, in a way, is a celebration of that fact," said Michael Hoag, department commander of New York’s VFW.

It’s also a reminder that not everyone killed in action gets laid to rest at home. This ceremony was only possible after the North Korean government turned over his remains in 2018.

"We are so thankful that the previous administration did bring this to closure," said Stuart Smead, Walter’s cousin, a lieutenant colonel who has carried on the family tradition of service.

The remains were turned over to the previous administration after a meeting between former President Donald Trump and North Korean leader Kim Jong Un.

"It’s vitally important that we send the message that, we want all of our MIAs and those killed in action to be returned home," said Francis A. LaMarsh, department commander for American Legion New York.

The family says they’re thankful to the Defense POW/MIA Accounting Agency (DPAA), which was able to match the remains to his brother, who waited his whole life to bring Walter home.