A lawsuit is in store for the Village of Fort Edward’s Police Department.

Earlier this year we showed you video of a man who was tased by a Village of Fort Edward Police Sergeant while being handcuffed at the wrists and ankles.

Attorney James Knox tells us they just filed a lawsuit against the sergeant in the video, along with the officers who stood by, and the entire Village of Fort Edward’s Police Department.

Robert Murat-Hinson was arrested on July 8th in connection to a bar fight. In the video he can be seen kicking the wall while handcuffed. One officer tells him to stop, when suddenly Sergeant Dean Watkins shoots him with the taser.

Knox said his client Robert Murat-Hinson suffered serious injuries and they want justice.“Even though Mr. Murat-Hinton was no longer damaging police property, it appears that the sergeant came in and appears to be angry, lost his temper and tased Mr. Hinton several times in the abdomen," said Knox. 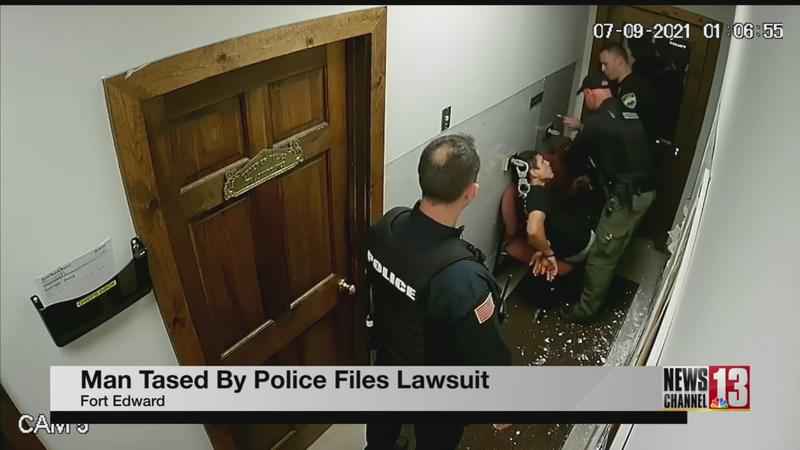 Knox said the amount of force was excessive and unnecessary. “We’re suing because anytime somebody’s rights are violated by police in this way, and they’re physically assaulted by police, they’ve got a cause of action," he said.

What’s most disturbing, Knox said, is the officers who stood by and watched the interaction. “There were other officers present who stood by, they did absolutely nothing to stop this sergeant from using a Taser on a man who couldn’t move, escape, or get away, and he was really helpless and doing nothing," he said.

Knox said they’re suing to get fair compensation for the amount of trauma his client endured. “If you’re in that position with your hands bound behind your back and up, and to suddenly have an electric charge stuck to your abdomen, it forces you forward, and it forced him forward, and his full body weight was pushed against his wrists and shoulders causing multiple fractures in his wrists and shoulder injury," he said.

Real reform, is what Mr. Knox said they’d like to see at the Village of Fort Edward Police Department.

We did reach out to the police department for comment and they have not yet responded.