Reaction is pouring in from state lawmakers after Lt. Gov. Brian Benjamin resigned on Tuesday after his arrest in a political corruption scandal.

Republican State Senator Jim Tedisco also called this an ethical indictment on Governor Kathy Hochul, as we now know he lied about his involvement in the alleged scheme in his vetting forms.

"Not only is this an indictment on him, I have to say it’s an ethical indictment against our present governor, Governor Hochul. Where was she vetting this individual? All these questions, as we all know were asked over and over again before she hired him and put him in place as the lieutenant governor. Total lack of effort on her part, or skill or ability to vet him," he said.

But Democratic Assemblyman John McDonald said it’s possible she didn’t have all the facts at the time.

"If there was an ongoing federal investigation by the FBI, there’s a possibility that that information was not shared with the proper authorities who were vetting him for that position. So I don’t find that a condemnation on the governor," he said. 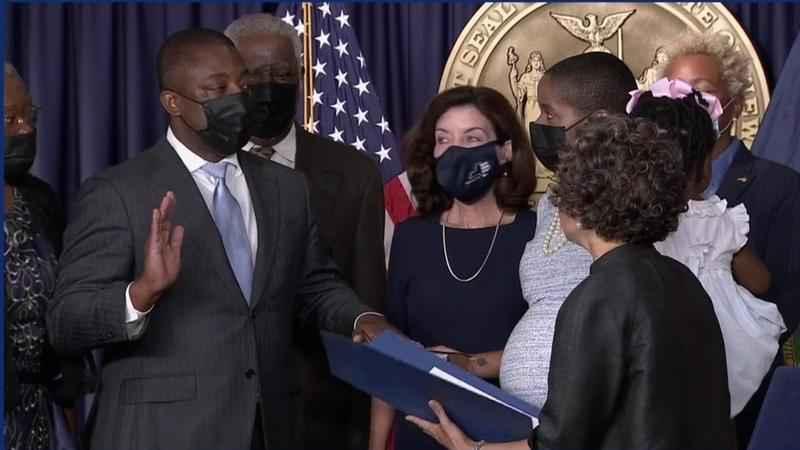 Here are some other statements from lawmakers:

It’s a sad day for New Yorkers under One-Party-Rule.

Violence in New York City and now, once again, the Governor’s Office is engulfed in scandal.

Earlier today, I called on Former Lieutenant Governor Brian Benjamin to swiftly resign today following his arrest on federal corruption charges and I am glad he did.

New Yorkers should be concerned with the judgment of Governor Kathy Hochul, who expressed the ‘utmost confidence’ in her hand-picked number two just a few days ago. She either ignored a betrayal of public trust or failed to do the most basic vetting available in public media reports. Either way, her administration is casting yet another shadow of corruption over our state government.

The people of New York deserve better than complicit Albany politicians abusing their oaths of office. We must restore ethics and accountability to state government, and actually bring forth a new era for our state. Albany’s ruling class may tolerate corruption, but New York voters won’t this November.

"The legacy of Sheldon Silver, Eliot Spitzer, David Paterson, and Andrew Cuomo continues with the corrupt Hochul Administration. It is clear that Albany Democrats have a corruption crisis that they own. Under one party Democrat rule, Albany is a cesspool of corruption. The people of New York deserve elected officials who serve with integrity, not Democrats who continue to create a culture of corruption. I will work tirelessly side by side all New Yorkers to support Republicans up and down the ballot to clean house this November."

"Kathy Hochul’s Administration has been in constant disarray since her very first decision last summer, which was to make Brian Benjamin the state’s Lieutenant Governor. As the State Senate’s biggest champion of the defund the police movement, the idea of Benjamin becoming the number 2 ranking person in New York should have been a non-starter. Just last week, Hochul was tripling down to cover for Benjamin and his misdeeds. Once again, it took leadership from others to try and fix this massive error in judgment. Hochul owns this mess and on November 8th, she’ll be the next one to get booted from office. It can’t happen soon enough."