HALFMOON – After more than three hours of tedious work on a hot and humid Wednesday night, a man was pulled from a trench in Halfmoon.

This all started around 5 p.m. Wednesday, when a man became trapped in waist deep mud in that trench.

He is a maintenance team member of the Sitterly Manor apartments on sitterly road who was doing water pipe repair in the trench, when the walls gave way and began to cave in on him.

Rescue crews worked frantically to remove mud, rocks, and vacuum out the water. Apparently, the walls of the trench kept moving in.

The man was conscious throughout the rescue. He was in obvious distress. Rescuers kept talking with him in an effort to comfort him. 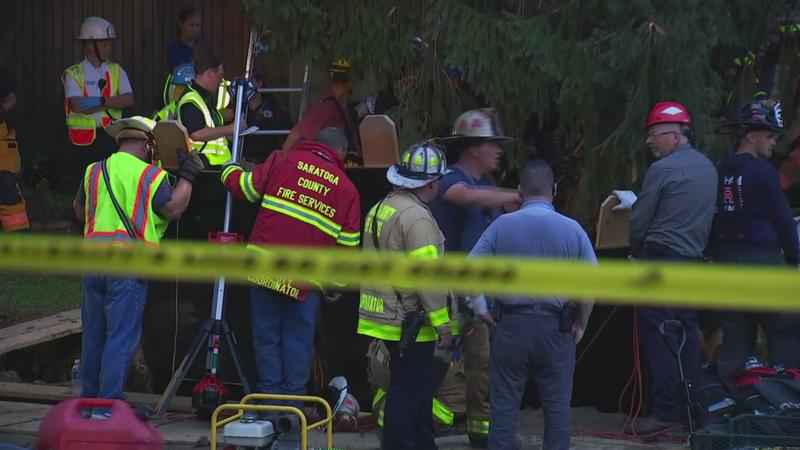 Rescuers try to free a man from a trench in Halfmoon.[Cj North / WNYT]

They also gave him fluids through an IV.

A special earth vacuuming truck was rushed to the scene.

"The challenges of the trench were we had a 50-year-old male who was pinned in the six-foot trench. His one left leg was bent behind him, so it made the rescue harder," said Deputy Chief John VanChance, with the Clifton Park Fire Department. "The town of Colonie trench rescue team, I called them as soon as I heard the information on the call, and they came up, and they did a tremendous job of rescuing this gentleman out of the hole. We ourselves, a lot of the departments, are not trained in trench rescues, so we called a specialized team out of the town of Colonie."

The next closest trench rescue team is in Syracuse.

The man who was taken to Albany Medical Center.

Ron Simoncini, a spokesman for the Sitterly Manor, issued the following statement soon after the successful rescue:

Today we are relieved to report that our Sitterly Manor team member has survived a harrowing experience, and while in pain and injured, he is expected to make a full recovery after a maintenance incident left him unable to extract himself from a mud-filled culvert.

We are incredibly grateful to the many fire, police, and emergency medicine personnel who came to our colleague’s aid. The professionals and equipment that arrived at our site within miniutes of reporting that a person was in distress was simply astonishing. The skillfullness and expertise that was rendered in rescuing our colleague saved his life and limited his injuries. We cannot adequately express our gratitude and appreciation for the commitment of these emergency responders.

We are happy to report that none of our residents was impacted by this event and we will be able to remedy the property condition quickly. And we will be by our colleague’s side as he recovers!