MIDDLEBURGH – Cleanup was underway Monday in the village of Middleburgh after heavy rains caused flooding.

You would be hard-pressed to find many other places in upstate New York where people are more on edge every time heavy rains fall. In August 2011, Tropical Storm Irene left the tiny village in the heart of Schoharie County submerged in water and misery.

When heavy rains came overnight Sunday into Monday, it clearly wasn’t as devastating as that hundred year storm a decade ago, but there was inconvenience.

The problem this time appeared to blocked culverts on the Gorge Creek. When that happens, water overflows the banks and begins seeping into basements and down Main Street. 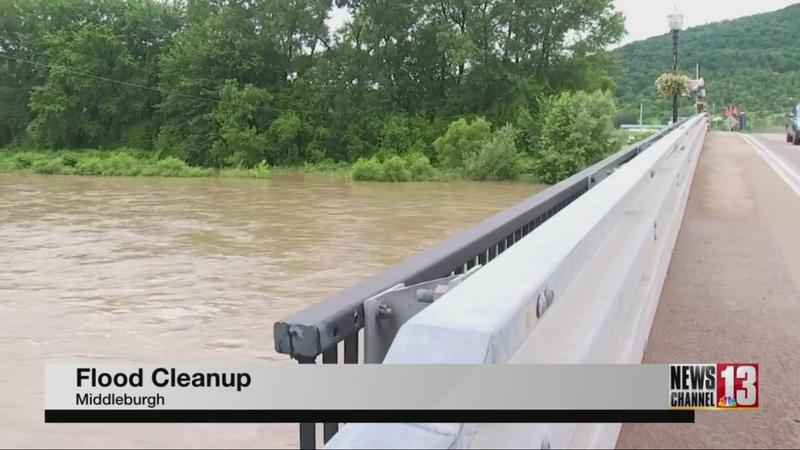 There was water damage and electrical damage done to Middleburgh High School.

Keep in mind, the Irene flood caused serious damage 10 years ago, and the school auditorium had to be rebuilt, The water was everywhere and the local volunteer firefighters were busy.

"Went into a mode of numerous calls of cellars needing to be pumped out," said Middleburgh Fire Department Assistant Chief Darwyn Gregory. "From there, it went even further with a stream by the Middleburgh High School that went over its banks and flooded the downtown. From that point, Upper Main Street proceeded to overflow at the Clover Y and flooded that area."

At the time NewsChannel 13 interviewed Gregory on Monday, he said work crews had pumped out about 15 to 20 cellars.

Learn more about how deep the water got in the high school by watching the video of Dan Levy’s story.