Danielle Kownack, a North Colonie School District mother, is shaken up after an alarming discovery on her daughter’s school-issued Chromebook. Now law enforcement is involved and Kownack still has questions. So she came to 13 Investigates hoping to get answers.

Kownack said when her 12-year-old daughter was issued her school Chromebook, Kownack didn’t think twice about it, but recently she found out her daughter was doing more than just studying on the Chromebook. The middle school student was using her Chromebook to text an older person through a texting app.

"Nobody knew that there was a pedophile, predator in your school," Kownack questioned. "In the bathroom, in the library, with my child on her Chromebook. She’s taking pictures, she’s even printing pictures out at school of this man." 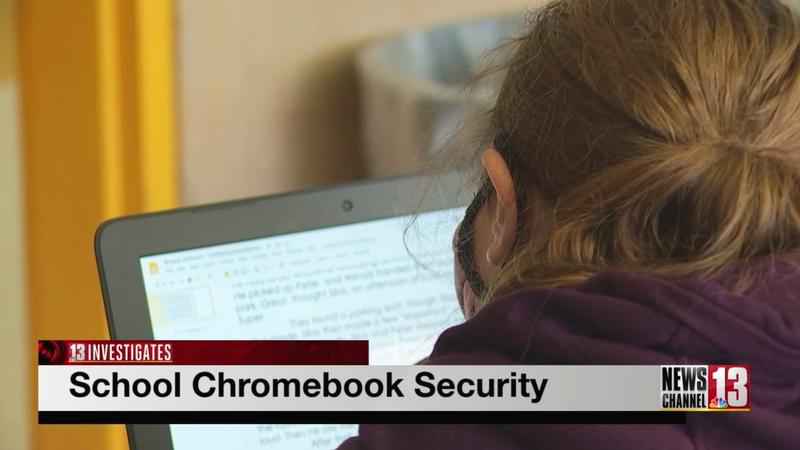 Kownack wants to know why and how was her daughter able to become a victim through a school-issued device.

How other districts are keeping kids safe online

13 Investigates spoke to the North Colonie Superintendent Joseph Corr to get some answers.

"I’d say Chromebooks are safe, yes," Corr answered when asked about the safety of school Chromebooks.

The superintendent said the North Colonie School District has been using the computers for about five years.

"It’s the world in which we live in, and it requires an additional degree of vigilance," Corr explained.

A portion of the North Colonie Chromebook security policy states, "There is a strict content filter in effect for all internet traffic, including at school and at home."

But a note in bold letters reminds parents that no web-filter is foolproof, so parents and guardians are encouraged to monitor their child’s use of the Chromebooks while at home.

North Colonie students are required to sign an agreement before being issued a Chromebook. If rules are broken, the superintendent said there are consequences. One of those consequences is called the penalty box, which was offered to Kownack’s daughter.

"Why does my child have to be different?" Kownack questioned. "How come she’s going into a penalty box but everyone else gets to still have access? Until their parents let it be known that it’s being accessed, how is that fair and how is that safe for every other child?"

Kownack said after that, the school blocked the app her daughter was using to text the stranger.

Corr said this is still a learning process for the district, but said keeping students safe is a priority.

"Websites are going to ultimately be approved by the district. When we become aware of a website that is not desirable, then we will seek to block it, and we’ve blocked numerous, numerous websites," Corr explained.

We reached out to about a dozen school districts in the Capital Region.

Over at Albany School District, there are multiple pages detailing the Chromebook security policy its students are expected to follow. The district’s superintendent, Kaweeda G. Adams, says it takes both teachers and parents to protect students from the dangers of the internet.

Adams is one to support the future of Chromebooks in classrooms, but said she’s aware of the threatening unknowns. Along with the students in her district, their parents must also sign the school’s agreement.

"The internet can be a great place to learn from," Adams expressed. "To access information, to break down systemic barriers…but with that, we also have to make sure we have precautions in place, and we can’t do it alone."

"The Watervliet City School District has several safeguards in place to provide security for student use of district provided devices. This includes a Board of Education adopted Acceptable Use Policy, Use of Social Media Policy, Internet Safety/Internet Content Filtering Policy, and the District Code of Conduct. A few safeguards that we can share that we have in regards to student Chromebooks include a content filter that limits/blocks access to inappropriate websites on the internet, two-step authentication to access user accounts, and the use of a closed domain-specific network that limits access to only our district students and staff.

Parents should always monitor their children’s technology and internet use. We recommend that families create safe spaces in their homes for the use of technology, which includes adequate supervision, along with having regular conversations with your children about the appropriate use of technology. This includes modeling appropriate online behavior, demonstrating responsibility, and outlining expectations."

The 13 Investigates team also sat down with Sarah Ruane, the FBI public affairs specialist in Albany, to get some tips for parents. Ruane said child exploitation investigations remain constant because online predators are everywhere.

"Any access to the internet makes them accessible to potentially bad actors out there with nefarious purposes," Ruane explained.

Ruane encouraged parents to prioritize communicating with their child, and keeping the line of communication open.

That’s something Stacey Angell, a Shaker Middle School Counselor, also supported. Angell says instead of parents taking their child’s devices away as punishment, it would be best if parents stayed aware of how technology is evolving and talk to their child if something seems wrong.

"Don’t take the device away," Angell encouraged. "By taking your child’s device away, that’s your immediate go-to, kids become a little bit more under the radar. They try to protect themselves because you’re basically taking their lifeline away if you take that away."

Most Chromebook security policies can be found on your child’s school district website, if you can’t find one, ask your child’s teacher.