It’s been a problem in the town of Glenville for years – trucks striking and getting stuck underneath the Glenridge Road Bridge.

"Thank God nobody has been really seriously injured or killed yet, but it backs up traffic every time we have a strike or a near miss," said Chris Koetzle, the town supervisor. "It zaps our local resources even though it is not a local road or a town-owned bridge. Our taxpayers end up footing the bill for that."

Changes are coming to help prevent the strikes from happening. In January, the state Department of Transportation installed a sign with flashing lights warning drivers about the bridge height. The town says it has seen some improvement.

"We seem to be, on average, down on bridge strikes in 2022 since those went up," he explained. 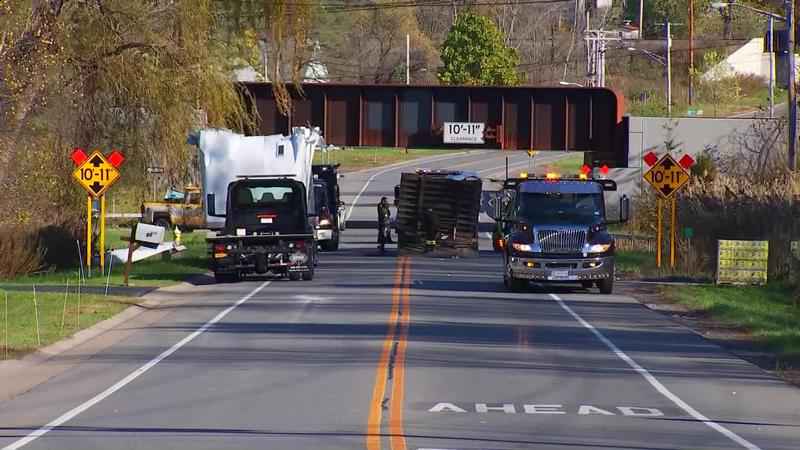 One of the many recent truck accidents at the Glenridge Road Bridge in Glenville.[File / WNYT]

The work doesn’t stop there, though. This week, DOT announced a timeline for phase two of the project, telling NewsChannel 13, "We are planning to install a truck turnaround area in the westbound direction of Glenridge Road this year."

Town Supervisor Chris Koetzle showed NewsChannel 13 the spot on state-owned property where it will be built. The turnaround is split, so if a truck needs to make a U-turn, it will pull off the right side of the road and make a partial turn. It then has to wait for traffic before crossing the road, eventually turning around.

Koetzle had pushed for raising the bridge or closing the corridor to truck traffic, but says this is really the next best thing.

"Absent of those two things, I think this is a good mitigation strategy, but it won’t prevent 100% of the strikes," he said.

In 2023, DOT will install a state-of-the-art infrared detection system ahead of the turnaround. It says the technology is similar to the sensor in your garage door opener. When a truck comes through that is too tall for the bridge, signs will flash with a message warning drivers about the bridge height.