In a deposition obtained exclusively by NewsChannel 13, the new witness in the Darryl Mount case, who came forward after more than eight years, said he saw Mount fall from scaffolding in Saratoga Springs and no police were near him at the time.

"Didn’t think much of it until I saw him fall," said Tommy Kvasnack, who was tending bar at Gaffney’s the night Mount ended up critically injured.

In December, Kvasnack told attorneys in the Mount lawsuit that after eight years he felt compelled to share what he saw.

"The truth had to come, and I had to say something," he told them.

He told John Aspland, the attorney representing the city in the Mount lawsuit, that he finally came forward after seeing a "kid on the news" who didn’t know what he was talking about.

Kvasnack: "The black guy that was on TV with the beard."

Aspland: "What was he talking about that you don’t believe he knows anything about?"

Kvasnack: "That the police officer threw him off a building."

Aspland: "You know that’s not true because you were there, right?" 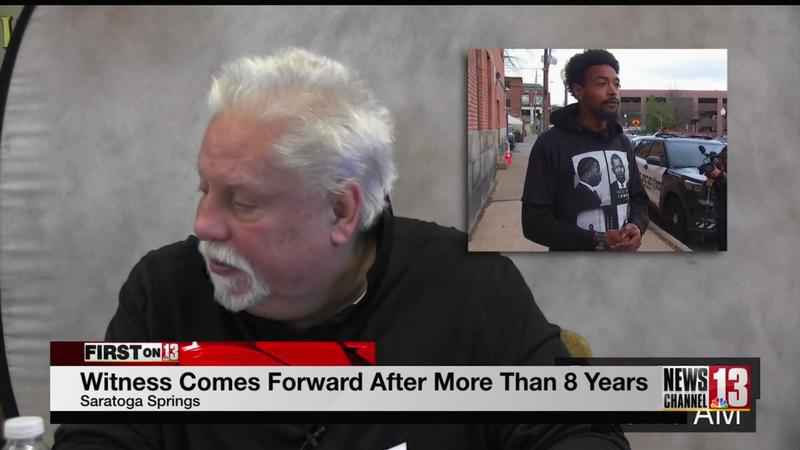 "I think it’s crazy that he referred to me as the black guy with the beard," Figuereo said Monday.

"The reason that you’re saying that you came out here and said this, is only because of me, to kind of like change my narrative or what we’ve been saying, but not for the family’s sake, not so the family has some peace and can rest assured that the police didn’t do anything wrong," Figuereo said.

This is happening as Public Safety Commissioner Jim Montagnino is out with a detailed report which concludes police did nothing wrong, but former Police Chief Greg Veitch failed to conduct an internal investigation.

Montagnino thinks the city should settle with the Mount family, saying, "it’s the right thing to do."

"Her attorney has spent years building up a case and doing in large part the investigation that never got done by the city, and so there should be some recognition that there is value in that," Montagnino said.

Veitch sent us this statement through his attorney, Matt Chauvin, who said, "My client disagrees with the conclusions…with regard to handling of the matter while chief of police. It would be inappropriate to comment on point by point inaccuracies of the draft report because of pending civil litigation. Mr. Veitch intends to defend himself in that matter and looks forward to a time when all of the facts may be heard."