There’s been outcry in a Fort Edward neighborhood because of the vulgar language in a sign one homeowner put up.
A neighbor reached out to NewsChannel 13 to check it out. When we did, things changed somewhat.

The sign was prominently displayed on the front fence of the home it says "F*** Biden and f*** you for voting for him," with the image of a middle finger.

The home is situated at the beginning of a neighborhood on Drifting Ridge in Fort Edward. Anyone driving in or out can see it.

"I think we’re all for freedom of speech. It’s just can we do it in a less vulgar way," said Dave Earsing, a neighbor. 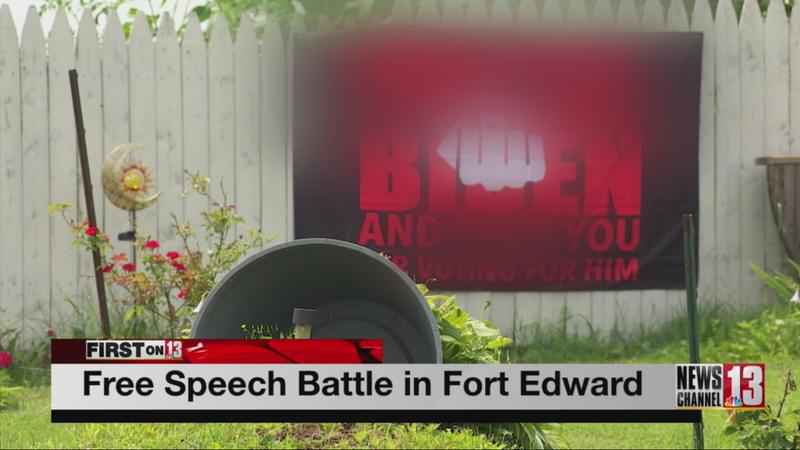 Word spread fast, and neighbors joined forces, starting a petition to get it taken down. More than 20 people signed it.

They reached out to the mayor, the sheriff’s department, and to the Fort Edward police.

Chief Justin Derway says there’s really nothing they can do. It’s private property, and freedom of speech allows you to post what you want outside your home.

"We live in this country, and we love having our freedoms, but at the same time, I can understand the other side where people are upset," said Derway.

NewsChannel 13 called, texted, reached out via Facebook with no response. However, after we reached out, someone came home and moved the sign from the fence to a flag pole.

Earsing says he also reached out to the homeowner, who refused to take it down.

Hear what Earsing thinks of the sign being moved to the flagpole by watching the video of Subrina Dhammi’s story.