Gov. Kathy Hochul is directing all state buildings to put their flags at half-staff Friday to honor those killed in today’s attacks.

New York lawmakers are condemning the attacks, calling on President Biden to bring those accountable to justice.

The attacks killed 13 U.S. service members and dozens of Afghans. 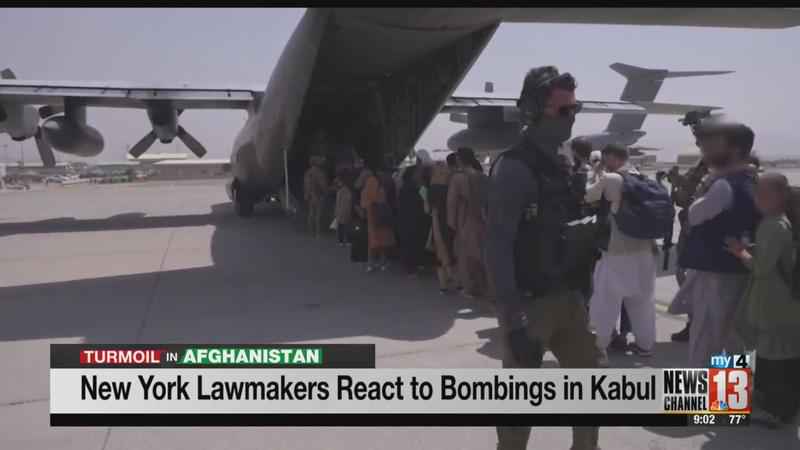 “I want to express my condolences, as the president has, to those grieving family members who have lost a loved one today,” Tonko said.

“I strongly condemn today’s horrific terrorist attack at Hamid Karzai Airport in Kabul. My heart breaks for the family, friends, and fellow soldiers of the service members who were killed and injured. I am praying for them and for the American military personnel and civilians still in Afghanistan. I continue to call on the Biden Administration to do everything in its power to bring every American citizen home safely. May God bless our brave service members and their families.”

“As a veteran of the war in Afghanistan, it has been extremely difficult to watch the devastating loss of American lives in Kabul. My heart breaks for their families and loved ones.

This terrorist attack is a painful reminder that extremists are intent on killing Americans. The President’s total lack of leadership has turned our evacuation efforts into an all-out retreat, empowered terrorists, and put America and her allies at risk.

It is now up to this administration to find and bring to justice those who are responsible for this heinous attack on our fellow Americans.”

“Our thoughts, hearts, and prayers go out to the families of the 11 United States Marines, and the United States Navy Medic, killed, and the American Service Members wounded, during the horrific terror attacks in Afghanistan today. This is a devastating loss of life of our best, bravest, and brightest. Today is a dark, tragic day for our entire nation. Please keep these courageous American patriots, and their families, in your prayers. And please pray for the safety of our servicemen and servicewomen, and the safe return of all Americans and our allies.”

"Our hearts break across the country for the brave service members who made the ultimate sacrifice. Their families are facing unimaginable news today. Please pray for them. The buck stops with the President of the United States. Joe Biden has blood on his hands. This horrific national security and humanitarian disaster is solely the result of Joe Biden’s weak and incompetent leadership. He is unfit to be Commander-in-Chief."

Hochul said in addition to calling for flags to be at half-staff to honor those killed in the attacks, she is keeping the victims’ families in their prayers.

"The cowardly attack on innocent civilians and selfless service members at Hamid Karzai International Airport struck at the heart of our democracy and freedom itself. New Yorkers have sacrificed their safety to serve in Afghanistan since 9/11, and our thoughts are with the families of everyone killed in today’s horrific act—both the civilians seeking freedom and the service members working to defend that freedom.

I’ve ordered flags on all state buildings to be flown at half-staff tomorrow, August 27, in memory of the service members and innocent civilians killed today. This memorial act is concurrent with the half-staff order already in place in honor of New York State Police Trooper James J. Monda, who died in the line of duty on the Great Sacandaga Lake on Sunday. I’ve also directed my team to follow the attack in Kabul closely should we learn that any of the victims were New Yorkers.

I’ve travelled to Afghanistan as a member of Congress, and I can say with certainty that the people of Kabul and all the American service members and our allies working to protect innocent lives there right now are in New Yorkers’ hearts and prayers. May God bless them."

Tonko says he agrees with Biden that now is the right time to pull our troops from Kabul.

“After two decades worth and trillions of dollars that have been invested, I believe that that’s the right decision,” Tonko said. “And quite frankly, this is a tragedy that has been 20 years in the making.”