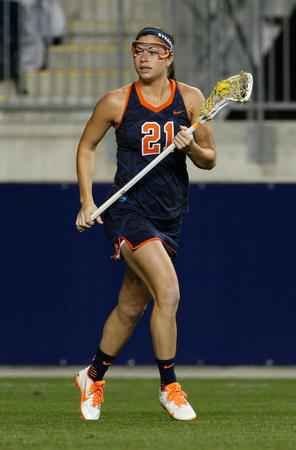 SYRACUSE, N.Y. – Four-time All-American Kayla Treanor led the Syracuse women’s lacrosse team to unprecedented success on the field and now she will guide the program from the sidelines. Treanor is the third head coach in program history.

"I am so proud to return to Syracuse University," Treanor said. "This place has always been home to me. I want our kids representing Syracuse as great students, athletes and most importantly great people. My goal is to compete for championships year in and year out. Go Orange!"

After starring for the Orange from 2013-16, Treanor started her coaching career at Harvard, where she served as an assistant for former Orange head coach Lisa Miller for one year. She joined the coaching staff at Boston College in 2017. In her four seasons with the Eagles, Boston College advanced to the championship game three times (2020 season cancelled due to Covid-19 pandemic) and claimed the national championship in 2021. Under her tutelage, two Eagles, Sam Apuzzo and Charlotte North, earned the Tewaaraton Award as Boston College ranked among the top offenses in the nation.

"We’re excited to bring one of the brightest coaches in the sport home to lead our women’s lacrosse program," Syracuse Director of Athletics John Wildhack said. "Kayla has experienced success at a championship level both as a coach and a student-athlete. She mentored two of the last three Tewaaraton Award winners and as an assistant, has coached in three consecutive appearances in the national championship game, including winning the 2021 national title. Kayla is one of the most decorated players in women’s lacrosse history. She is the right person to guide our program as we take the next step to win a national championship."

Treanor led the Orange to four consecutive appearances at Championship Weekend from 2013-16 and a spot in the 2014 national championship game. She is the only player in program history to earn IWLCA first-team All-America honors in each of her four seasons. Treanor was a three-time finalist for the Tewaaraton Award and Honda Award and earned the IWLCA Attacker of the Year Award in three consecutive seasons (2014-16). In addition, she was the ACC Offensive Player of the Year in 2014, 2015 and 2016 and earned a spot on the NCAA All-Tournament Team in each of her four seasons.

The Niskayuna, N.Y. native also earned recognition for her work in the classroom. In 2016, she earned the ACC Women’s Lacrosse Scholar Athlete of the Year award and was named to the All-ACC Academic Team.

Treanor ranks seventh on the NCAA and second on Syracuse’s all-time scoring list (393 points). Treanor holds school record for career goals (260) and ranks fourth in career assists (133). She set the single-season school record with 79 goals in 2014 and established the program mark for draw controls in a season (217) in 2016, which stood as the NCAA record until 2019.

In addition to her success at Syracuse, Treanor has excelled on the international stage for Team USA. She helped the U.S. take home gold at the 2017 Federation of International Lacrosse (FIL) Women’s World Cup. Treanor amassed 43 points on 24 goals and 19 assists – all team highs – in the tournament, which included a record-setting 12-point performance against England in pool play. She will take part in a training camp with Team USA June 29-July 1 in preparation for next summer’s World Championship.

Treanor has played professionally since 2017 and currently plays and serves on the Player Executive Committee for Athletes Unlimited.

Treanor takes the helm of the program replacing Gary Gait, who was named the Orange men’s lacrosse head coach on June 7.

This appointment is subject to approval by Syracuse University’s Board of Trustees’ Executive Committee.