NORTH GREENBUSH — This is a sign of summer: they’re getting the beach ready at Snyder’s Lake and the North Greenbush Summer Camp is just a few weeks away.

Campers get to kayak, do arts and crafts, fish, play games, and just have some all-around, old-fashioned camp fun.

Many learn to swim.

"There are sections in the lake that allow non-swimmers, intermediate swimmers, and advanced swimmers, so the better they get at swimming, the more privileges they have in the lake," said Mike Miner, North Greenbush Building Department Coordinator, who is also Youth Programs Coordinator. "And we see them progress throughout the summer, where they are non-swimmers in the beginning and they’re jumping off the dock by the end of the summer."

There’s a big pavilion and almost everything here is outdoors for the five-week program..

Signs of summer! They’re getting the beach ready at North Greenbush Summer Camp- & celebrating the lifting of restrictions. Story tonight on Channel 13 at 4 and 5. pic.twitter.com/8obgfrAF0G

"It’s liberating for the kids. They’re finally able to be outside and do what they want to do without having to have a mask on," said North Greenbush Deputy Town Supervisor Kelly Hoffman. 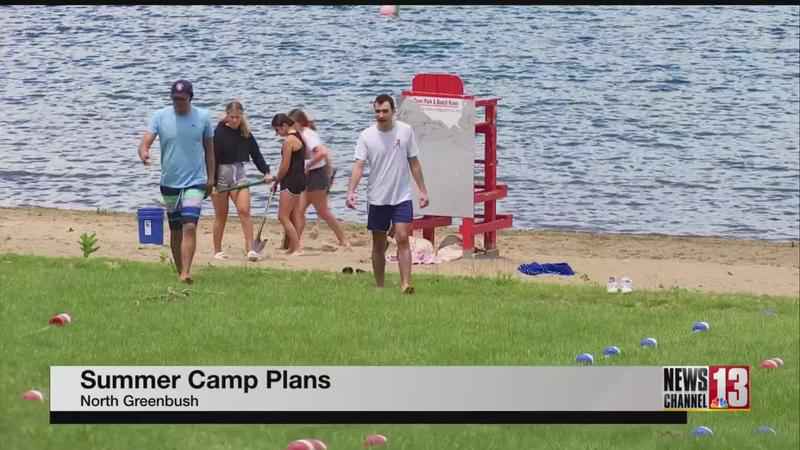 Here, as in many places, there were concerns about hiring, but they feel they’ve got enough staffing to open registration up now to the usual numbers and grades.

"Being here, playing games, doing exercise, sports, but most of all, being with their friends," said Hoffman. "The friendships that they make at camp will last a lifetime for them."

They’re thankful restrictions are gone. Putting together a camp plan with limited group sizes and activities was challenging.

Now, they’re free to be a regular summer camp once again and they can plan to add back in some of the field trips.

"And we know that it’s a really important thing for the kids just to get out and have fun," said Miner. "Get some energy out in the summer and you see kids going home happy and that’s a great thing. You see staff going home tired. But that’s a good thing. It’s great for the kids."

The town is accepting summer camp reservations now and camp begins on July 12.