On June 21, the summer solstice, people from across the world will fight the darkness of Alzheimer’s through a fundraising activity of their choice.

In honor of The Longest Day fundraiser, a South Glens Falls man is encouraging people to get out and hike.

John Marcantonio said he started walking and hiking when his mother, Mary, was diagnosed with Alzheimer’s.

"Getting that emotional release and going to focus on something other than being a primary caregiver for my mom really helped with my well-being, and it became a passion," Marcantonio explained.

Since her death, Marcantonio has been doing everything he can to keep her name alive.

By raising awareness and money for Alzheimer’s, Marcantonio is hoping he can help prevent another family from going through what his family went through.

On Saturday, June 18, Marcantonio is encouraging people to get out and hike while wearing purple. It’s a fundraiser called, Paint the Peaks Purple.

"By wearing your purple, people on the trail will stop us and say ‘hey why are all of you guys wearing purple shirts’," Marcantonio said. "It gives us an opportunity to talk about what we’re doing and what we’re trying to accomplish."

The Davies will be Painting the Peaks Purple for the 2nd year. They’re no stranger to high adventures.

"My whole life we’ve been hiking together," Aidan explains while he stands next to his father, Chris.

Like Marcantonio, Paint the Peaks is a personal hike for the father-son duo.

Chris was diagnosed with younger-onset Alzheimer’s at the age of 50.

"I didn’t expect at 50 years old to all of a sudden realize acutely that I am forgetting a lot of information," Chris said after being asked was he surprised by the diagnosis.

Alzheimer’s is the sixth leading cause of death in the United States, and with no cure yet, the disease can bring a family a mountain of problems. But like many others, the Davies are taking everyday one step at a time.

To learn more about Paint the Peaks Purple and to donate towards The Longest Day fundraiser, visit the Alzheimer’s Association’s website. 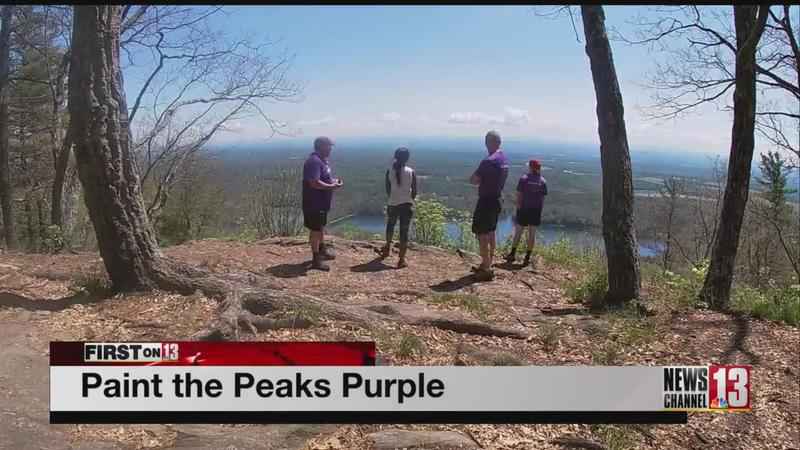