A colorful crosswalk in Saratoga Springs intended to celebrate Pride Month might have to be removed.

Saratoga Pride worked with the city of Saratoga Springs to paint the rainbow crosswalk next to Congress Park. Many people gathered Thursday for an official ribbon-cutting ceremony at the walkway, which was painted last month.

“I cannot believe how many people came out and are so enthusiastic and joyous that we’re able to create this symbol of unity and welcoming for our community,” Saratoga Springs Public Safety Commissioner Robin Dalton said.

While the crosswalk is popular, we are told it is not compliant with state and federal standards. The state Department of Transportation says the colors on the crosswalk need to be removed.

Saratoga Springs Mayor Meg Kelly says she received an email Friday from DOT saying the crosswalk was not compliant with the state and federal standards. She shared with us the email where it says in part, “Please have the non-conforming colors removed from the crosswalk to bring it back into conformance with the [Manual on Uniform Traffic Control Devices].” 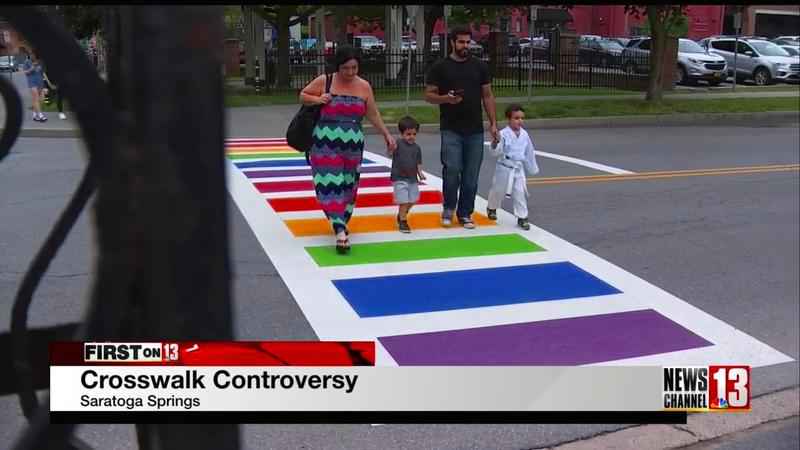 The mayor says she has contacted Dalton.

But when we spoke to Dalton, she said there are colorful crosswalks all over the state and says they were being compliant with the state standards.

“We were very diligent in making sure that whatever we did was compliant with New York State Department of Transportation regulations,” Dalton said. “I have not heard from the state DOT. Certainly if there is a problem, we’re happy to address it, but as far as I know, there is no reason why we can’t have this beautiful crosswalk.”

Kelly says she supports the pride movement, but not this crosswalk.

“I always supported Saratoga Pride and the pride movement. I marched in the Albany parade with them. But I could not go today to support the ribbon-cutting because this is an illegal crosswalk, and it should be removed,” she said.

We reached out to DOT for comment, but have not heard back yet.