An Albany man who’s still fighting for his life in the hospital successfully underwent a critical surgery Sunday, according to his family’s spokesperson.

Jordan Young was shot by Albany Police last week as he was walking his dog. Now his family is outraged and demanding answers from the department.

Police body camera video from both officers involved was released by the department following the shooting. Police Chief Eric Hawkins says the encounter happened because his officers were looking for someone they say took part in a home invasion. In the video, officers are seen stopping to talk to Young as he’s with his dog in the street.

That’s when they notice young is carrying a knife. Officers ask him multiple times to drop the knife, but Young runs at them with it, and that is when shots were fired.

The family’s spokesperson, Alice Green of the Center for Law and Justice, said they want to know why the shooting happened when Young has a documented history of mental illness, including schizophrenia. And she said police had no right to stop him in the first place. 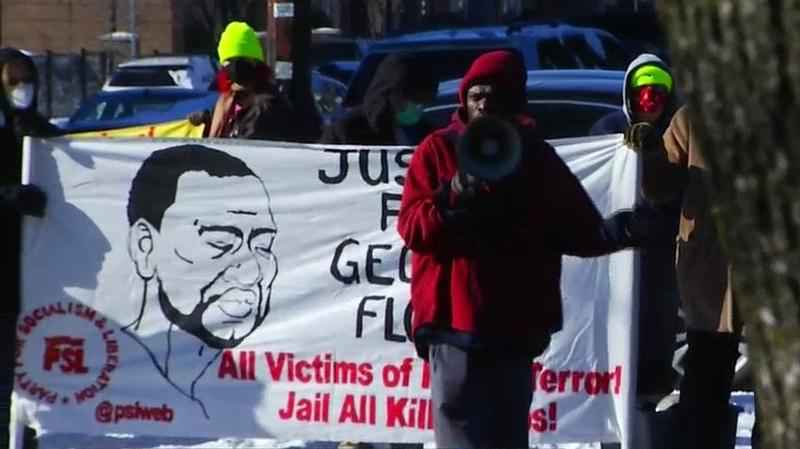 "There was no reason for them to talk about this home invasion. If they knew what the person looked like, they would have had a description. What does this have to do with Mr. Young? He’s walking his dog," Green said.

Shouts of “Justice for Jordan Young!” were heard as they marched from where the shooting took place near New Scotland Avenue and Dana Avenue to Albany Police South Station.

NewsChannel 13 was the only station there as protesters called for justice at South Station.

“We don’t want to see this ever happen again in our community, plain and simple,” said one of the organizers, Lexis Figuereo.

Demonstrators expressed frustration that Young was met with deadly force as he charged officers. They believe Albany Police were not equipped to handle his mental health issues, and they want APD to establish crisis response teams for mental health.

“They should have contacted someone who knows more about mental health issues,” said Green.

“Do you think I like looking over my shoulder every day?” one Black protester shouted into the megaphone.

Figuereo joined the crowd in questioning why police pulled over to speak to Young when they were in the area investigating a home invasion.

“Once again, this story doesn’t make any sense to us. They said they were going to a home invasion with somebody that had a gun to their head. Then they said there were people jumping off roofs that were running into that house. This man was walking around, walking his dog, so why was he stopped in the beginning?” he asked.

Police said Thursday they were still looking into why– as Young is believed to have lived in the home where the home invasion call came from. Chief Hawkins speculated he may have been involved in calling in the invasion, but did not confirm his involvement.

Another question protesters have raised is why the officers did not have tasers. Chief Hawkins said their use was purposefully reduced in 2020 to try to cut down on officers’ use of force in response to the social justice movement after the killing of George Floyd. But protesters and the family called that into question.

“They weren’t equipped with them, and they should’ve been. That’s another issue that we’re going to deal with,” Green said.

NewsChannel 13 asked police for an interview to respond to the protesters’ claims, and they referred us to Thursday’s press conference where they released body camera footage and answered reporters’ questions.

Green claimed in an interview with NewsChannel 13 that she was barred from attending on behalf of the family, but was able to ask police questions later. She’s concerned the family was not notified Young had been shot.

“They learned about it through the media, which I think is terribly disrespectful,” Green said.

On Sunday, Mayor Kathy Sheehan told NewsChannel 13 in part, “APD received approximately 9,000 calls for emotionally disturbed persons since 2019, and all but one were resolved without the use of deadly force. Chief Hawkins has prioritized de-escalation training and it shows.”

She blamed healthcare systems for the lack of mental health help, saying, “I’m grateful for [Chief Hawkins’] leadership and commend him for ensuring our officers have the skills needed to respond to calls for service from Albany residents, especially those resulting from a complete failure of the healthcare system to address the mental health needs of our community.”

Young remains in custody at the hospital, according to police, and protesters are upset as he likely faces criminal charges from the incident. Both officers involved are still on administrative leave.