LAKE GEORGE — Friday night at the Lake George Beach Club, it was busy. One customer was about to give his waiter a really good night.

Frank Scavio, owner of Paesan’s Pizza, was out to dinner at the Lake George Beach Club, one of the spots that sell his popular frozen pizzas.

Just for fun, he asked his waiter to rate the pie. Raffaele Sanchez-Anunziato gave it an 8.4. The exchange was captured on cellphone video.

"My man Raffaele — See, Raffaele still doesn’t know who I am," Scavio says on the video. 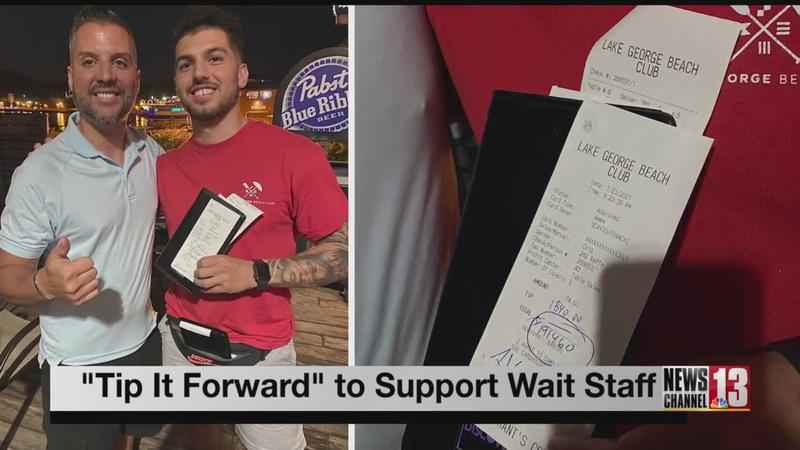 It was a funny moment, but Frank had another surprise in store.

"He left $1,840 dollars in the tip column, and I was just speechless, didn’t know how to react, couldn’t stop saying thank you," said Sanchez-Anunziato. "That doesn’t happen every day."

Scavio knows the business. He owns Paesan’s Pizza in Latham and other locations.

He knows many local restaurants still fighting back from the pandemic, are now hit with a labor shortage, and he wants to show support for working wait staff.

"A lot of people are doing it to support their families, and kudos to them because they’re not living off the system. There’s a lot of people who are still sitting home collecting, and we need them to come back into the workforce," said Scavio.

"It’s tough when you take pretty much a whole year of just no business," said Sanchez-Anunziato. "So to have something like that happen is just amazing."

"Hopefully someone else watches this and they do it also," said Scavio. "And we really need to appreciate our servers and waiters and anyone in the hospitality industry."