TROY – A rally in Troy Friday evening was calling for the release of immigrants being held at the Rensselaer County Jail.

The group is complaining about what it calls oppressive conditions in the jail, but the sheriff is pushing back.

Leading up to the rally in the jail parking lot, there was a protest march through the streets of South Troy, with bullhorns blazing and voices echoing off the buildings on both sides of 4th Street.

Then at the jail, speakers, one by one, denounced conditions inside the lock-up.

Many speakers were either ex-prisoners or family members of current inmates. 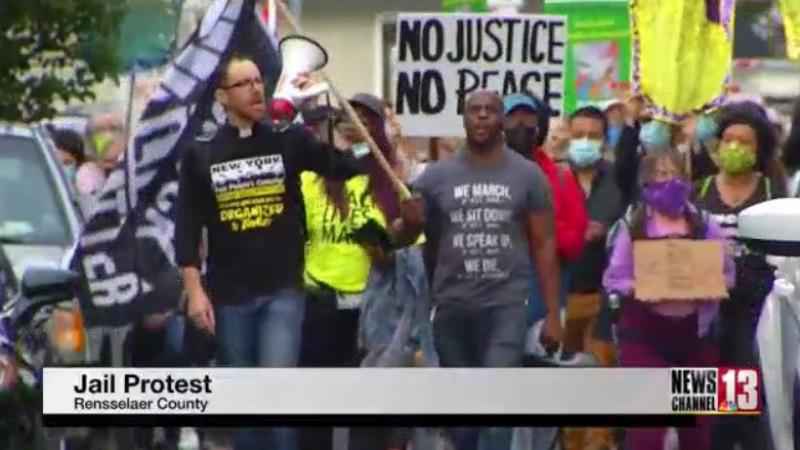 They spoke about multiple women who have reported systemic violence and harm they face inside the jail.

They told the story of a woman identified as "Ms. Q," who has been held there for more than two years.

The protesters are demanding the immediate release of Ms. Q and all ICE detainees.

They’re also demanding that this jail sever its contract with ICE.

They also want to see an end to the ICE contract with the county.

"We are fighting for the Dignity Not Detention Act in the New York Legislature, so that no county jail can enter into an agreement with ICE and inflict this torture on immigrant communities," said Sophia Genovese, Ms. Q’s attorney.

"This facility is like all jails in New York state, is overseen by the Commission of Corrections," said Warren County Sheriff Patrick Russo. "They come in and do periodic inspections. So if there was something wrong, it was filthy or there were people being abused or stuff, we would know about it."

The protesters then began chanting near a barbed wire fence, so the inmates knew they were protesting on their behalf.